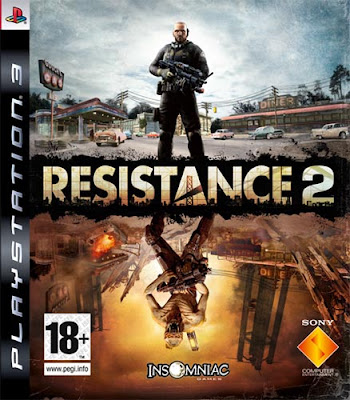 I recently had quite a bad time with Resistance: Fall of Man, it had lots of issues, mostly concerning the antique feel of everything and the sub-par graphics.  I don't know why I decided to play Resistance 2 after that ordeal, but play it I did.  The question is; did the sequel address the issues of the first and become a better game?

Resistance 2 (a first person shooter by the way) takes place immediately after the events of Resistance with Nathan Hale captured by a band of mysterious soldiers.  These soon reveal themselves to be a special American army branch that consists of soldiers immune to the Chimera virus (much like Hale).  They all go off to an Icelandic base which is under attack by a Chimeran army.  In the chaos a monstrous test subject known as Daedalus escapes.  Two years later and America has been near over run by the Chimeran army.  The apparent leader of this army is the escaped Daedalus.  Working with his group Sentinels Hale and the army must find a way to stop Daedalus's (probably evil) plan. 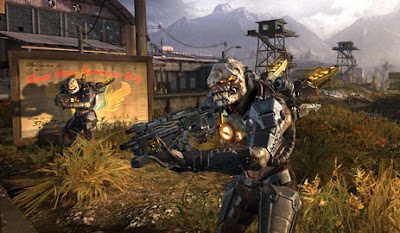 The story for this game is pretty terrible once again, though the pieces of hidden Intel dotted around the levels are quite interesting this time around.  Resistance 2 I am shocked to say is a damn good game!  The game looks fantastic, is exciting, and really empowers you as bad-ass Nathan Hale.

This time around the locations mostly are based in America with lots of variety.  The mountains of Utah, flooded Chicago, the swamps of Louisiana, and a deserted mountain town in Idaho all bring plenty of variety.  The game still hasn't got away from its penchant for having you constantly be in underground bases under attack, or climbing Chimera towers and ships, but set pieces make these far more intense than the dull slogs of Resistance.  Set pieces are constant and around every corner and are all quite good. 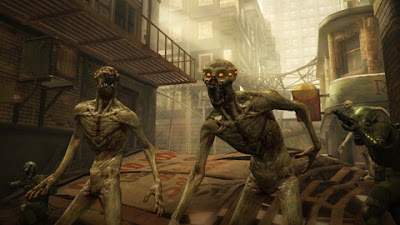 Most the enemies of the first game makes comebacks, though are noticeably weaker than the bullet sponges found there.  Because of this the enemies are a lot more fun and numerous to fight.  A new enemy type is a hulking brute that is invisible (Predator style).  They remain invisible until they are right on you, and kill you in one hit, it is no exaggeration that apart from one fluky time every single time I encountered these I was killed right away, only surviving by memorising when they were going to appear.  As you can probably guess this dulled their presence a bit and just made them irritating and unfair.  Zombie Chimera make a welcome arrival.  The first game had humans converted to Chimera by a factory process but know they turn pod-people like in gooey sacks littered about the game scape reminding me of Half Life 2.  These newly hatched Chimera charge towards you 28 Days Later Infected bringing to mind the feeling that Left 4 Dead brings.

The game features many bosses, most of them gigantic, highlights include fighting a giant sea monster on a floating platform, and an awesome fight with a Godzilla sized beast that has been pursuing you though a City for most the level its in.  The end boss is thankfully much much easier than the nightmare that was the end of Resistance: Fall of Man.  To fight these bosses, and indeed all the enemies of the game you have access to a load of weapons.  Taking a cue from Halo etc you can only carry two weapons now (also gone are the backwards feeling health packs, recharging health all the way now!).  The weapons are pretty much the same as Resistance, a few new ones (such as an enemy sniper rifle, and a weapon that fires saw blades) and some updated ones (the weapon that fires through objects now shows you images of enemies through the objects making it far more useful than having to guess). 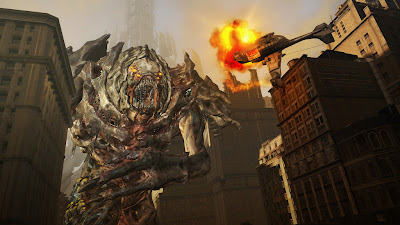 I really do seem enthusiastic for this game and I am.  A really pleasant surprise that has me actually looking forward a bit to Resistance 3, sure the plot is terrible but the game looks and plays great.