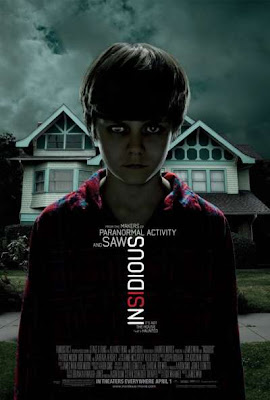 Insidious is from the makers of Saw and Paranormal Activity.  The trailer made it look near identical to Paranormal Activity, It is so much more scary though. I feel confident in saying that I do not think I will ever watch this film again, I swear I felt like sprinting out of the Cinema screaming for a large portion of this fright fest!

Insidious starts off with a married couple moving into a new house with their 3 children.  Soon after moving in their son Daltan trips and hurts his head.  All seems well but in the morning his frantic parents are unable to wake him up, he is in a coma which Doctors just cannot explain.  Three months later and with Daltan still in a coma bizarre things start to happen with Renai (the boys mother) hearing strange creepy voices on the baby monitor, seeing strange figures who vanish and doors that slam shut for no reason.  Not really believing her but wanting to help, her husband Josh agrees to move home thinking his wife is just under a lot of pressure with her tales of a haunted house.  The hauntings follow though and it isn't long before Josh too is seeing unexplainable things.  In desperation a spirit medium is called who gives them shocking news... 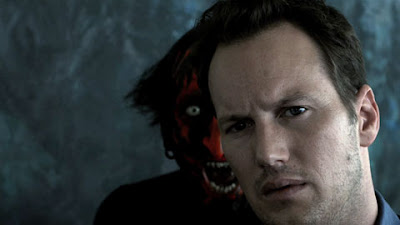 Rather than the style of Paranormal Activity this film is shot with proper cameras which actually manages to increase the terror.  The first half of the film is the usual stuff you see in these kind of films though that doesn't lesson the scary moments of figures turning up in the background completely unexpectedly.  An early highlight involves a dancing Victorian looking boy that was spooky as hell.  Around the midway point the terror ramps up and feels like the classic Poltergeist in its scope of horror that is leaking into the house.

The utter crazy weirdness is what makes this film so effective.  The mediums way to speak to the spirit world is to use this monstrous gas mask making her voice disfigured, the whole seance scene is madness, scary madness with flashing light bulbs, disjointed fast paced directing and extreme close ups creating the feeling of a out of control nightmare.  Later in the film utterly mad waxwork looking static ghosts show up in one scene, easily the most disturbing of the whole film which I can't reveal for fear of spoiling.  Needless to say this film drags you down into a place of complete insanity. 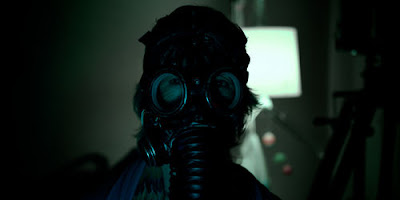 The acting is of quite a high standard and even the introduction of two comedy characters doesn't lesson the impact of horror, indeed the two nerdy helpers of the medium are a real highlight with their subtle slapstick comedy and their one-up manship.  The spirits in the film are different to ones seen in other films; a red faced demon who crawls along walls, a maniacal smiling woman and an old woman in a wedding gown are among some of the creepy highlights on offer.

I left the Cinema knowing I had seen something special, but also realising I don't think there is any way I could bring myself to watch this horror ride again.  Very scary, and despite a quite predictable ending really felt like a fresh film.

Posted by Daniel Simmonds at 03:18

Insidious was a crashing bore that ineffectively ripped off much better films, like "The Changeling" and "Poltergeist" I wanted to like the film, I really did, and all the 'blurbs' certainly made it sound good, but alas it was pathetic. Premise good ... movie not. You have a right to your opinion though!

I thought it was really scary, something off kilter and unsettling about it, like the world viewed at a strange angle