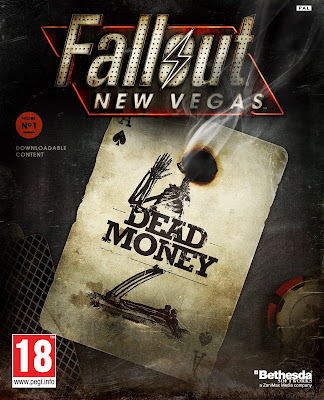 I have had quite a break from Fallout New Vegas so I thought what better way to get back into it by playing the games first add on pack 'Dead Money'.  Recently I discovered that there is to be 3 additional add ons over the next couple of months, so really is a fine time to play it.

Dead Money is set in a separate part of the Fallout world.  A radio broadcast talking about an exclusive casino  brings you to an underground bunker.  Upon investigating the bunker sleeping gas is released and your character passes out.  You awake in a mysterious Villa complex where the sky is a blood red, a giant casino sits on a hill top in the distance, and you have a bomb collar around your neck.  A transmission from an old man named Elijah informs you that you have been brought to the Sierra Madre casino; a casino full of riches from the old world, hidden in a cloud of toxic fog, a place that was thought to be nothing more than a myth.  The voice tells you that he wants you to recruit three strangers located around the Villa compound and then together break into the Sierra Madre Casino to pull off 'the heist of a lifetime'.  If any one of you die then you all die as your collars are linked, should you be successful and get the hidden treasure for Elijah then you will be released from your collar and allowed to return back to the waste land. 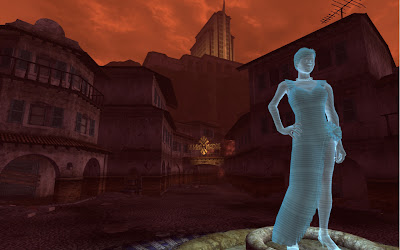 The Sierra Madre location is unique in feel to the rest of the game.  A thick red fog covers large areas of the Villa, wandering into this toxic fog sees your health quickly drain so you must instead find routes around, under or over the fog.  The Villa is very interesting with lots of logs and diary's detailing the creation of the place by a rich oddball for his trophy wife.  The grand opening of the Casino never occurred as the opening coincided with the night the bombs fell and destroyed the old world.  Each of the three characters you must recruit are in different areas of the Villa; a super mutant with a split personality disorder is in the Prison, a mute scarred woman is trapped in the medical complex while the last of your team is in the trap infested residential area (a ghoul who has been at Sierra Madre since the fateful opening night).

Dotted everywhere are radios and loud speakers, unfortunately for you their frequencies have the ability to set off your bomb collar so they must be destroyed, switched off or avoided.  A rapidly increasing beeping noise issues when you are in range, it is always a shock when your head suddenly explodes and your faced with the game over screen! 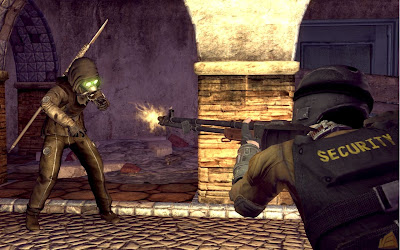 The enemies are all unique for the add on, mainly consisting of weird silent humanoid creatures called 'ghost people', these strange people hunt any intruders, and can only be killed by severing a body part, otherwise they will just pass out to revive later.  Also around the complex are invincible hard light holograms, these guards patrol along routes and can be used to help you fight the ghost people or must be sneaked past.

Once you are into the Casino the 2nd part of the game begins.  This section is far more puzzle based with a few stealth sections thrown in.  The game succeeds due to the amount of back story provided not only by computer entries but also just by the position of items and bodies laying around.  The whole location of Sierra Madre really feels like a ghost town and the game gives you the feeling that you are unwanted here. 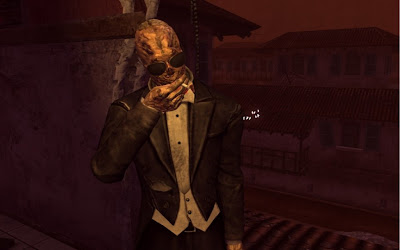 At around 4 or 5 hours this first DLC is a good length that ranks up there with the best of the Fallout 3 DLC just mainly due to its clever play mechanics that gives you something different feeling from the main game as well as quite a sorrowful tale of greed and heart ache.

Posted by Daniel Simmonds at 03:52