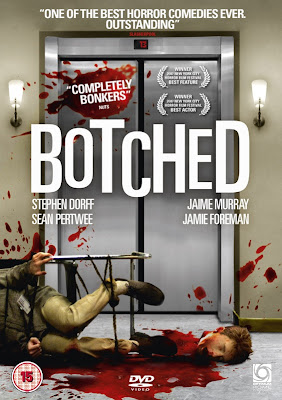 Botched is one of the many films I got for Christmas, I have now finally gotten around to watching it.  It is a horror comedy set in Russia but actually filmed in Ireland.

Ritchie Donovan; a professional thief (played well by Stephen Dorff) is sent to Russia to retrieve an ornate golden crucifix after a job he worked on in the films intro went bad.  He must retrieve the crucifix or his life is forfeit to his boss.  Ritchie and his two accomplices steal the crucifix from the penthouse of an office block but things start to go wrong when the lift they are making their escape in breaks down, making one of the accomplices panic and take the other people in the lift hostage.  They all get out the elevator and onto a mysterious secret floor of the building.  Expecting to negotiate with the Police they instead discover the person they are communicating with over a security guards radio is in fact a deranged killer who plans on killing everyone; hostages and criminals alike.  It seems the floor they are trapped on is the killers playground and they must work together if they are to escape him. 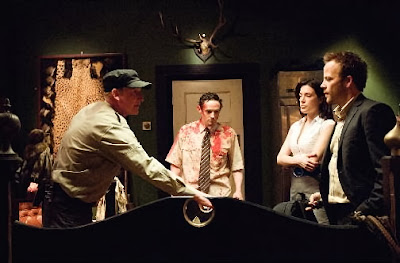 The film is described as a horror comedy which immediately made me doubtful.  Most films which profess to be horror comedies fall very flat (such as Tokyo Zombie) but luckily this very rarely strays into badness with both a decent script, bizarre characters, and humorous events.  The film increasingly ups the weirdness with ever increasing absurdities.  Religious nuts, deluded ex-army, a killer who dresses like a medieval warrior and more creates a fusion of pure madness with various groups of survivors running around the dim floor of the office block, stumbling into deadly traps, and making ridiculous contraptions with which to try to catch the killer.

There is plenty of violence but the effects are so terrible that they must be purposely so.  Dead bodies are obviously dummies and look rubber-like, a reoccurring rat is the most fake looking thing I have ever seen in my life, and later in the film a characters severed hand leads to a stump that is pathetically fake looking!  This really brings to mind the bad effects of such classics as Peter Jackson's Bad Taste and Brain Dead and is all the better for it. 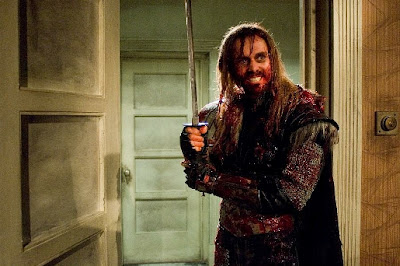 The action is frequently complimented with jaunty comedy music which at times makes the film seem like a really violent version of Scooby-Doo as characters run madly through the maze like corridors pursued by the odd looking sword wielding manic killer.  This film is frequently funny, sometimes even laugh out loud funny, a particular favourite was the ex-army security guard who has a very inflated sense of his own skills constantly telling himself and others around him that he is the Alpha male while being completely incompetent (such as when he goes to kick a door open he instead puts his foot through the door panel getting his leg stuck).  Dorff as Ritchie is shown as one of the only really normal people, suffering the strangeness of his accidental companions while just wanting to complete his mission and get out of the crazy place while keeping cool and level headed.

Despite the bland location used this film works well, the location serving to trap the characters into a melting pot of craziness.  Does what it says on the tin; both a horror and a comedy.  Very bad effects, over the top acting, and not much plot to speak of somehow works for this film creating a entertaining 90 minutes.

Posted by Daniel Simmonds at 06:43