Scream - A retrospective of the film series 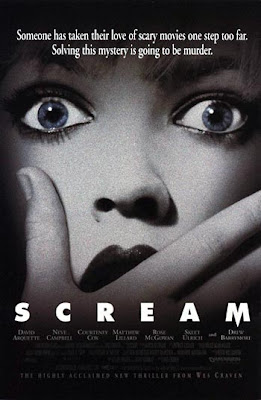 With Scream 4 being released at Cinemas this past Friday it seemed an appropriate time to have a look back at the original trilogy.  The original Scream was the very first horror film I ever saw (not including The Lost Boys), at the time I found it terrifying somehow.  I later brought a Scream mask that I remember wearing on the way to the Cinema to see Scream 3.

Scream was released back in 1996 when I was 14, it is of course directed by the master of horror Wes Craven.  I never actually saw the film until a few years later when my sister brought it on video.  Scream was partly responsible for bringing life back into the horror genre which was dying a slow death with a glut of poorly made sequels to older horror franchises.  Scream made horror sexy again whilst also taking the mick out of horror conventions (especially with the scene in the film when some party goers are watching and criticising Halloween on a TV) and injecting humour.  The film starred a series of famous people including Courteney Cox, Neve Campbell, David Arquette and much was made of the fact that Drew Barrymore was in it despite her character being killed in the opening scene (she even got her face on the video cover for Scream). 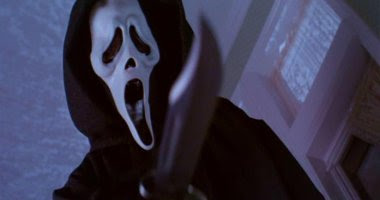 Scream was successful in that its killer 'Ghostface' a slasher who wore a black cowl and a rubber ghost mask was an apparent horror fan quizzing his victims on horror as well as having the famous line 'Do you like scary movies?'.  The film was a cool and scary who-dunnit leaving you guessing till the last 1/4 on who was the culprit.

Less than a year later in 1997 Scream 2 was released.  Scream 2 again played with the notion of horror conventions by having characters list off what to expect in a sequel (such as higher body count).  In the film a film had been created based on the original Scream called 'Stab', the opening scene having someone stabbed to death in front of an audience gathered to watch Stab.  Perhaps an indictment on the fans of the Scream films it showed Stab fans as a baying mob of idiots.  Scream 2 was where the series started to go downhill, the final scene is terribly over the top with terrible over acting, the killers and their motivations poor.  During the whole film there is only one good scene (a campus killing in broad daylight).  Started here was the invincibility of the core characters of Campbell, Arquette, Cox et al who no matter what happens to them always survive against the odds in a unrealistic way. 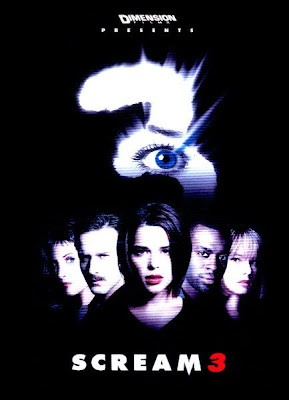 Scream 3 was released in 2000 and was the first one I saw at the Cinema.  This was a vast improvement on Scream 2 but still not a return to the excellence of Scream.  The film this time took place on the film set for Stab 2 (the film within a film).  The bigger locations and more involving plot brought the series to an apparent end, yet once again no core characters are killed which really rips the horror out of the film when every returning character is (literally) bullet proof.  There is a scene in Scream 3 when it seems that Ghostface has won and Campbell's character is dead, I like to end the film here as the remaining film time is so sweet and happy ever after that it ruins the experience.

2011 sees the release of Scream 4.  Once again all the old cast are reunited, having seen the trailer I do not have high hopes for the series.  I may be wrong but I am guessing that Scream 4 is not going to be a very good film, and I bet that none of the returning characters are killed off; something that needs to happen if the series is ever going to get back on track.
Posted by Daniel Simmonds at 10:18