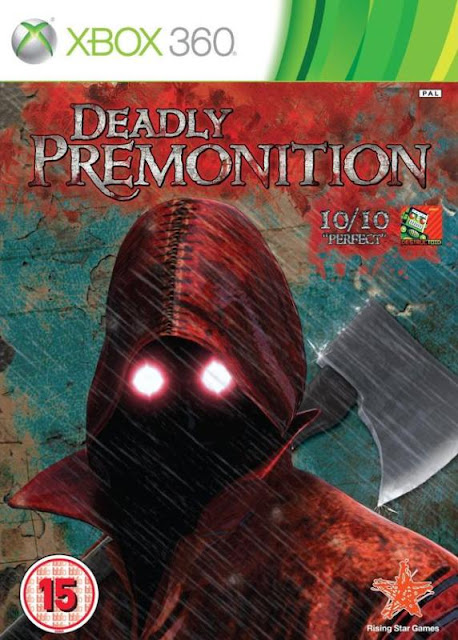 I have finally finished Deadly Premonition after literally months and months of it.  I believe it was before Christmas that I started the game and now twenty hours later it is done.  Deadly Premonition is already quite a cult game, originally released in Japan it was then released everywhere else at a budget price due to its perceived lack of appeal and cheap looks. Deadly Premonition gained a cult following mainly based on the fact that every part of the game is broken and terrible yet for some reason this just makes the game amazing; truly something so bad that it is good.

The game sees you play as FBI oddball investigator Francis York Morgan who has arrived at the small country town of Greenvale due to the bizarre murder of a young waitress whose death is similar to others he has been investigating. Soon after his arrival more young females start to show up dead, murdered at the hands of a shadowy serial killer known as the Raincoat Killer. As York searches for answers the mystery of the towns past and his own past are brought to light. 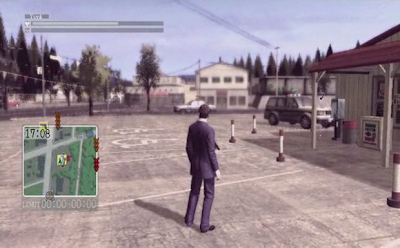 Deadly Premonition is a game I initially struggled to get into.  The things putting me off were all gameplay issues, it was only after being able to ignore these that I could get into the game and really get immersed in the great (well terrible) plot involving red seeds, purple mist, trees and zombies (yay!).  Cutscenes are plenty and very long, some getting over the ten minute mark.  The cutscenes are unpausable which became very annoying.  The voice acting is terrible with the actors over playing their lines but the matching bizarre and at times nonsensical script means this negative turns into a positive.

The game really feels like two different game styles jammed into one.  Half the game sees you in the open world environment of Greenvale. You have an in game clock with which to go to certain story moving appointments but ignoring those you get a whole town to explore either on foot or by car.  The car controls are terrible and frequently give out entirely, your car requires petrol and can be broken making it unusable.  Around the town are cards that can be collected, as well as side missions that are given to you by the towns eccentric inhabitants. My problem with the open world is that it is so confusing, your map is terrible and you are unable to mark way points meaning a lot of wrong turns and dead ends.  Driving is very boring but luckily broken up with York's random pop culture musings to his other personality Zach. 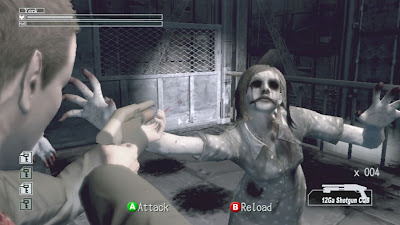 York has a split personality, but cleverly his other side 'Zach' is you the player.  The game compliments this by having York tell 'Zach' its his turn when action sequences happen, almost like he is York in the cutscenes but Zach in the action scenes.  The action scenes are the other half of Deadly Premonition.  Feeling totally separate to the rest of the game these action sequences are very survival horror esque and are full of zombies. Locations take on a Silent Hill level of disrepair and horror and become populated by zombies who literally bend over backwards to attack you, many hold weapons of various types but others who are weaponless attack by grabbing you and then sticking their arm down your throat.  These dark dungeons are full of zombies who crawl out of the ground and out of walls as well as simple Silent Hill style puzzles that are easy but fun enough to do.  These sections feel totally out of place as they are never mentioned within the plot and so it seems they are just there to make the game more of a game.

At times during the survival horror sections you encounter the Raincoat Killer himself who appears as a supernatural being with a magical axe.  In these sections you have three different reoccurring actions. The first sees you in a quick time event as you avoid the Killer's axe blows, these sections are not sign posted meaning death usually occurs first try. The second Killer event involves you having to hide (usually in a locker) while he explores the room you are in. When he approaches your hiding spot you must press a button to hold your breath. The first time this happened it was a tense affair but it is repeated too many times during the game and becomes boring. The third type of event sees you pursued by the Killer.  In this event you have to waggle the analogue stick left and right to make York run while climbing and pushing various objects.  The Raincoat Killer is kinda lame it has to be said! 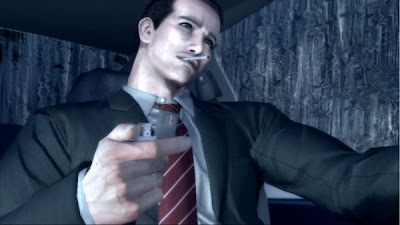 The whodunit of the serial killings is a very fun and suspenseful story with plenty of twists and turns, the murders themselves are inventive and despite the graphical limitations come across as quite sinister and horrific  such as a woman crushed under a giant art piece and someone impaled on a giant hook through their throat.  Plenty of blood and grimness (the victims have their tongues cut out) as well as some clever third act revelations make this part of the game fascinating.  The game turns totally off the rails bizarre by the end which did ruin some of the plot somewhat with monstrous bosses which it is not made clear if you are actually in supernatural land and fighting monsters or if this is just a reflection of the villains image of themselves and the world.

The game is broken in lots of places and yet it somehow gels together to bring a unique feeling take on survival horror.  At times extremely similar to the cult TV show Twin Peaks (it even has its own version of the Red Room!) it comes into its own with the feeling that the games designers are in on the joke and realise the game is terrible and camp it up as much as possible. You get plenty of game for the cheap price and usually if you have a problem a solution can be found online (I never knew how to advance time until looking online; turns out smoking cigarettes causes time to fly by apparently). Special mention must go to the random soundtrack that includes salsa music, whistling tunes, jazz music and even the song Amazing Grace turns up at a fantastic point in the game!

Posted by Daniel Simmonds at 16:42