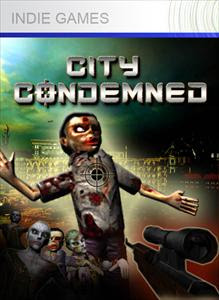 City Condemned is yet another X-Box Indie game of which there must be hundreds by now.  The game goes for a serious vibe and plays as a shooting gallery.

You play as a sniper holed up on the rooftop of a ruined building in a city of the dead.  Your view point looks out onto a ruined Town square in which various humans are located. Using your trusty sniper rifle you must protect the humans from the onslaught of the zombies.

City Condemned goes for a dramatic vibe with mournful, suspenseful music playing over the game.  The location of the town is a dank, dilapidated place, the only sound being your sniper rifle as you fire it. Each round sees you with a target number of zombies to kill, after each round you can buy additional ammo for your sniper rifle, as well as buy better sniper rifles and health packs. 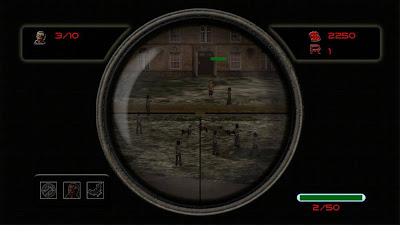 Identical zombies swarm towards the humans who don't move and just seem content to stay wherever they are standing. Head shots work best but they can be taken down with shots to the body. All the zombies are the same; a zombie wearing a grey top, and having quite a bushy head of hair. As well as zombies there are wild bats which also attack the humans. Zombies can also enter the buildings surrounding the town square, this makes hitting them more difficult as you need to wait until they pass windows to be able to kill them.

The game is ok but really nothing different to the hundreds of other sniper zombie games, it is better than a lot of them but still quite boring. Only 80 Microsoft points so up to you I guess. You can really tell the excitement in my words for this review!