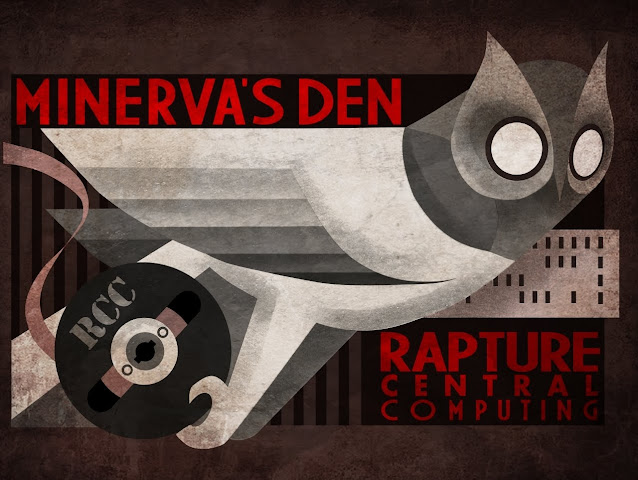 I have finally gotten around to playing the DLC for Bioshock 2.  Minerva's Den is the only story based DLC released for the game, the other just being multiplayer maps and the 'Protector Trials' that was basically a pure game mode. Minerva's Den is a stand alone story (first person shooter) set in the under sea city of Rapture, you don't really need to know the story of Bioshock 2 as this has little to do with that despite being set at around the same time.

Minerva's Den starts with a prototype Big Daddy (a giant diver suit wearing monster) on its way to the computer wing of Rapture. An explosion takes out the Big Daddy, until some unspecified time later it awakes. Over the radio a man named C.B Porter tells you that you are named Sigma and that it is your mission to get to Raptures supercomputer 'The Thinker' and find a way to transport its memory to the surface world. Reed Wahl (a co-creator of the super computer) is determined to stop you, convinced by the predictive power of the computer to see you as a threat to his work. Twists and turns lead to revelations that give far more significance to events than you would think. 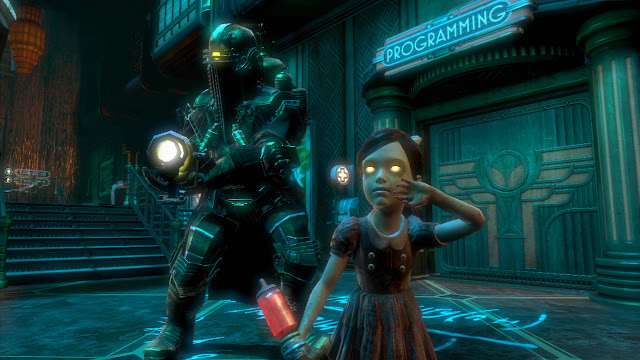 Bioshock 2 was a game I loved when first released but is one that I have never felt an urge to revisit, there was no need to make a sequel to the near perfect Bioshock and the bigger focus on combat and less interesting locations put me off somewhat. Minerva's Den takes place in an entirely new section of Rapture. The DLC feels very similar in scope to Bioshock 2 where you also played as a prototype Big Daddy. The DLC is effectively a microcosm of that game with similar levels of combat, Little Sister challenges and plasmid (magic powers) upgrades. The Splicers (psychotic humans) you face are different in look to those of the main game, mostly comprising of nerdy science types but their abilities are mostly the same apart from some Brutes (hulking Splicers) having an affinity for fire, and some of the teleporting Splicers having an affinity for ice.

The plot is slowly drip fed to you and as the main game a lot of the story is relayed to you via recordings left by the inhabitants of Rapture, which are very well done and excel in making the recordings sound like they were done by real people. The last part of the game is when most the story happens and leads to an almost Twilight Zone level of twists that ends the game on quite a melancholy tone. 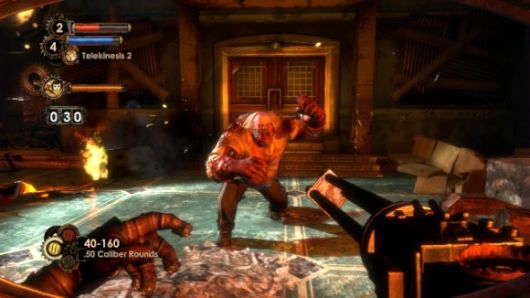 All the locations are new, mainly rooms full of data banks as well as offices and a cool environmental control section. 'The Thinker' is apparently responsible for quite a lot of Raptures workings but this fact is ret-coned in so it unfortunately feels a bit forced. There are some references to Andrew Ryan (the main villain of Bioshock) and Lamb (the villain of Bioshock 2) but other than that this is totally separate. There is one new plasmid; a ball that creates a mini black hole that sucks enemies towards it, kinda cool but not an ability I used much.

The DLC was about three hours long so a decent length. I would say that even if you are sick to the back teeth of the Bioshock world that Minerva's Den is worth playing for its story alone.