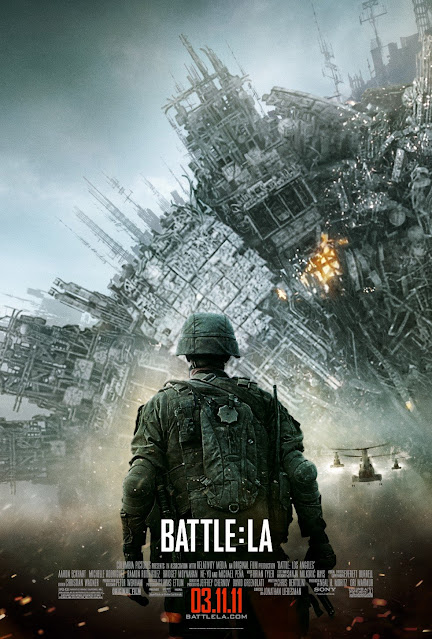 I wasn't really too fussed about seeing Battle: Los Angeles, I had heard about it but not actually seen any trailers. I thought the film was shot from a hand cam for the duration and it was only when watching that I realised it is actually much more traditionally shot.

The film is about an alien invasion, alien ships have landed next to cities all around the globe and as the title suggests this film takes place in LA. The city is slowly being over-run by robotic aliens, a squad of marines (including Aaron Eckhart as Sgt. Michael Nantz) are dispatched to locate civilians hiding out in an abandoned police station behind enemy lines, they have three hours to rescue the civilians before the army orders a massive bombardment on the area designed to wipe out all enemy forces.  Things don't go according to plan, the aliens are far better equipped than intelligence suggested and it turns into a battle to not only get back to safety but also to find a way to stop the alien attackers.

The film looks amazing, the special effects are to a very high quality and the surround sound of the cinema really made it seem like bullets where whizzing by. Explosions, gunfire, and the technology of the alien invaders all looks really authentic and does not look fake or out of place. The film seemed to me like a cross between the videogames Call of Duty: Modern Warfare and Halo, mostly helped by the way the film at many times did feel very game like with marines gun sight perspectives used a lot, as well as 'boss' moments such as when the marines come under attack by an alien version of a tank.

The film tells the story of a small squad of likable but generic marines, it seems purposely that a lot of high action points occur away from these marines who have been given a minor task to carry out that bears no importance to the war effort. The acting is of a consistently high standard but everything is very predictable; such as the marine who sacrifices himself to save his friends, the guy who ends up conveniently discovering the alien's weakness (and from that point onwards having no trouble killing them), and blasted Michelle Rodriquez who seems to play exactly the same character in every film I have ever seen her in. There is lots of American bravado and corny one liners, and even a few "Hoo-Rahs" but it isn't hammered in as much as in some films (such as the cringe worthy Americanism of Independence Day). It just focuses on this one area of the world rather than make it the saviour of everything. 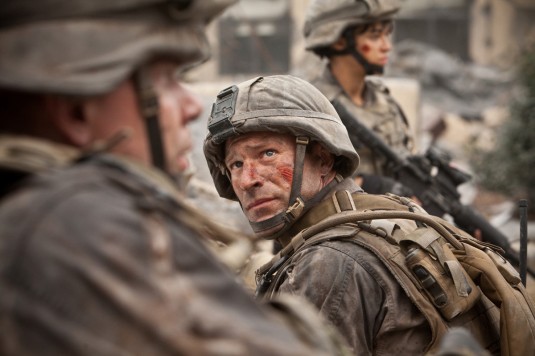 Where Battle: Los Angeles succeeds is the way in which it takes a tired story and makes it feel fresh and new, you have seen everything before, there are no new ideas, but it is all executed so wonderfully and even the many, many stereotypes for this genre of film don't get in the way of a real solid action fest from start to finish. While not totally able to tug on your heart strings at least knows where they are.

Posted by Daniel Simmonds at 02:27