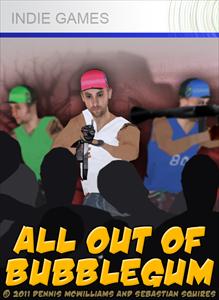 All Out of Bubblegum! I thought was going to be a tower defence game, but it has more in common with a twin stick shooter.  The title of the game is of course taken from the cult horror flick They Live (when Rowdy Roddy Piper walks into a bank and says "I came here to chew bubblegum and kick ass, and I'm all out of bubblegum").

The game sees you as one of four gang members (the game is up to four players) defending a square piece of land in a town overrun by zombies of all shapes and sizes. The zombies attack in waves, after each wave you can build defences such as walls and turrets with which to defend yourself. 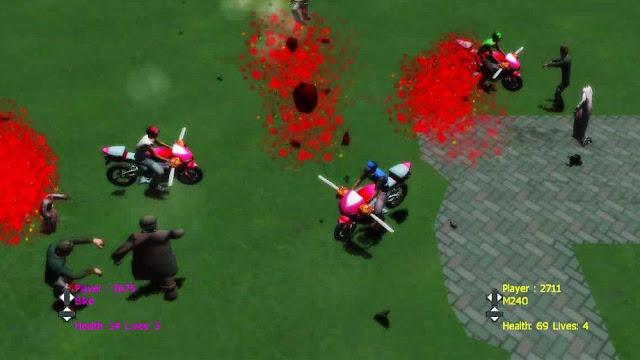 All Out has a really weird look to it that made me feel like I was in some sort of gaming nightmare. The zombies and humans have a kind of plasticine look to them and the enemies terrible A.I works in their favour and adds to the sense of unreality as they spin on the spot and get stuck to walls. The soundtrack is also quite odd but fits in well with lots of badly digitised speech on the title screen and uber loud gunshot noises.

The zombies fall apart as you shoot them, even with limbs missing and their heads missing they will still keep on coming making your wall defences more of a burden than a boon. The undead are the running kind and can easily pin you into a dead end of your own making. Zombies come in lots of variety, both male and female, as well as child size and giant size making each round just feel...odd. 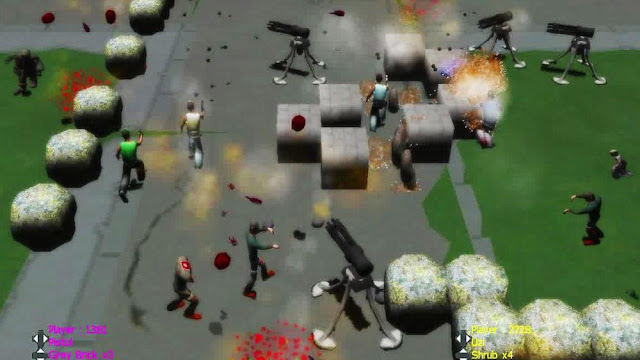 The building part of the game is also not very good, you have a limited time to build your defences but the lack of an option to move the screen during this process means that your defences are never too big. Each wave done opens up a shop where you can buy some admittedly quite cool weapons, including a motor bike with chainsaws strapped to it (straight out of Dead Rising 2)

To be honest All Out of Bubblegum! is really not that great and I did not buy it, but the bizarre broken nature of this game means that you should give it a try if it sounds like your thing, feels like a zombie dream I used to have (also very hard, just like surviving a zombie apocalypse should be).