When reviewing Zombie Arena a few months back (find it on the index page!) I said it was the worst type of shovel ware crap.  It was with some trepidation that I loaded up its sequel Zombie Arena 2.  Would it be an improvement or would it somehow manage to be even worse?

Zombie Arena 2 again sees you playing as your Avatar (this time I sported a Duke Nukem T-Shirt and again my trademark Frankenstein mask).  Rather than be trapped in an arena and forced to fight for your life you are now on the walls surrounding an arena where you must use your trusty bow and arrow to protect a defenceless human from the onslaught of zombies. 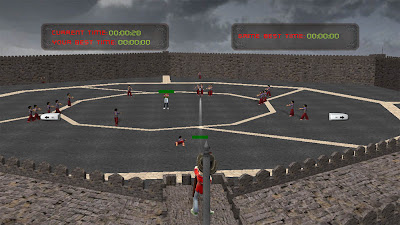 Zombie Arena 2 is actually a better game than the first.  Your character has more movement, with the tap of a shoulder button your Avatar runs and leaps from turret to turret like someone from the god awful Crouching Tiger Hidden Dragon films (which does look kinda funny).  Your not alone on the walls, you also have zombies heading towards you on the ramparts, but it is the masses in the arena that should be your main concern.

Your weapon is a bow and arrows and again you have access to power ups that deal various different types of damage.  Also you are able to purchase a rope (from the shop you visit between waves) which gives you easier ways to get around the arena.  There is more strategy this time around as you must position yourself in the best place to take out the approaching hordes.  The approaching hordes are unfortunately all identical looking, I had kind of hoped for some variation this time around. 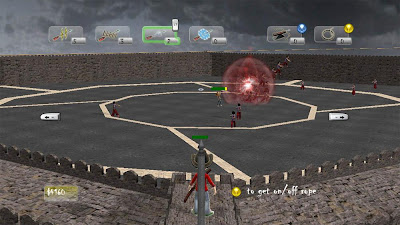 Posted by Daniel Simmonds at 02:23