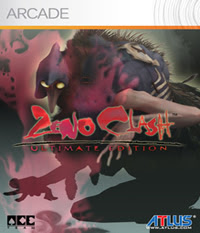 Zeno Clash has one of the worst videogame titles ever in my humble opinion.  Originally released on the PC the game has now been released in a special edition on XBLA.  It is a first person brawler that sees you exploring a creepy fantasy world.

You play as a Human called Ghat, the game starts with you having just killed your parent; a giant monstrous being called Father/Mother.  Pursued by your brothers and sisters (various humans and animals) you flee your home to find somewhere new to live.  As the plot progresses you come to learn via a series of playable flashbacks the reason for the murder of your parent. 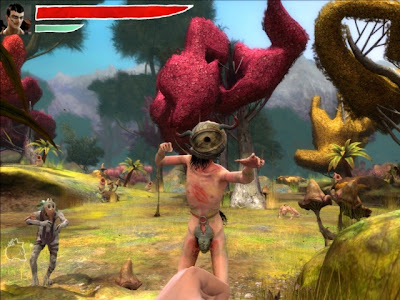 Zeno Clash takes place in a sinister fantasy world which reminded me a lot of the world of Dark Crystal.  The Town you come from is a hotch potch of strange ramshackle buildings, you venture into the woods of the Corwids and then cross the desert from which no one is said to have ever returned.  Eventually you get to the very creepy end of the world where it is forever twilight and shadows roam the lands.  Along the way you fight a lot of people.  Combat is all first person, with one shoulder button for light attacks and one for heavy attacks.  Stunned enemies can be thrown, and downed enemies can be kicked.  Various uses of block and evade lead to a series of different attacks such as spinning kicks, and hammer fists.  Combat is satisfying if a little bit samey.

The game is really short but has a really unique look and feel to it.  The locations are all purposely odd looking and have a strange alien feel to them.  For the most part you are fighting Corwids (a group of insane people) as well as your many brothers and sisters, but there is also wildlife to fight which is mostly done via the games many guns.  The guns are all weird and created out of bones and animals, a later level sees you relying heavily on a magic wand which can fling balls of light at shadow monsters (very similar to zombies) which made a nice change of pace.  A highlight is a boat trip down a moonscape setting that has what appear to be astronauts pursuing you. 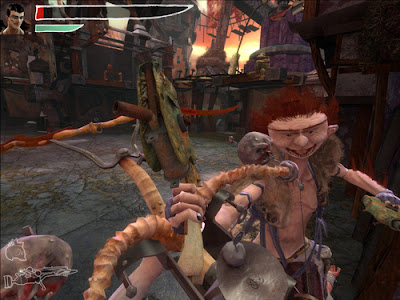 A very strange game, but it does draw you in to its bizarre world.  Quite easy, but there are fighting arenas outside of the main game that provide some challenge.  It is unsettling, weird and kooky but I did enjoy the brief time I spent and is definitely worth checking out if your looking for something a bit off the wall.

Posted by Daniel Simmonds at 04:18