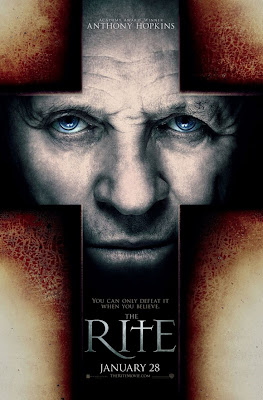 First of all I would recommend that if your interested in seeing this film that you don't watch the trailer.  Luckily I never saw the trailer before seeing it, which is good as it gives away the whole plot.  I had no idea what to expect when seeing The Rite, I knew it was some type of horror but that was all.  The Rite is a film about exorcism.  I can't help but give slight spoilers so tread carefully.

Michael Kovak (played by Colin O'Donoghue) only trained to be a Priest to escape his family business of tending to the dead.  He planned to leave before he said his vows.  His mentor at Priest School recognises greatness in Michael despite his lack of any faith in religion and convinces Michael to take a two month course on Exorcism in Rome.  In Rome his lecturer sees Michael's bullish lack of faith and directs him to an old friend, an old exorcist who has performed over 1000 exorcisms; Father Lucas Trevant (played wonderfully by Anthony Hopkins).  As he helps the Father perform his exorcisms his beliefs that possessed people are merely mentally ill comes to be questioned as he witnesses things that cannot be easily explained away. 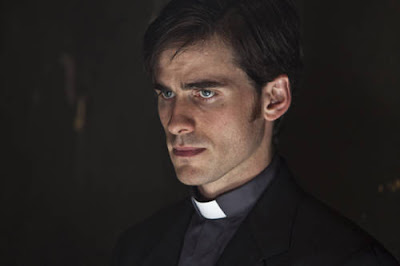 The film is played a large part as a realistic story.  The film purports to be based on true events but the reality is not so exciting as the true parts of the story are the most mundane.  The film descends into fantasy territory with Michael running around Rome plagued by mad visions such as a room full of frogs and a mule with glowing red eyes, while the exorcisms sees the apparently possessed turning all burnt looking and veiny as the demon takes over.  There are some cool things that have been added to the film which research afterwards only brought to light, specifically what type of Demon is supposed to be the one possessing the victim (to exorcise a demon you must know its name).

O'Donoghue is wonderfully cast as the unbelieving Priest in training, his arguments and scepticism are convincing, though less so when he wont believe despite blatant evidence.  The characters back story is shown quite a lot, explaining his coldness with his father and his desire to escape the confines of the family business (such as him witnessing his father calmly embalming his dead mother as a child).  Hopkins is fantastic as ever, his exorcist coming across as both creepy and powerful but displaying human weakness.  The film looks ace with lots of well shot angles and the pervasive element of rain to intone coming disaster and humour used to good degrees. 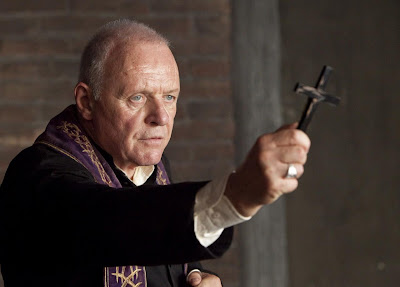 The film is not really scary, at most it gets creepy only really managing to make you jump by cheap shock scares.  Nonetheless I really enjoyed this, maybe because I was in a good mood, but I got what I expected; a enjoyable, well made horror film.  At times the film feels like a superhero origin story rather oddly maybe due to the excellent film score.  If your in the mood for a decent exorcism film then this is 'The Rite' film to see!