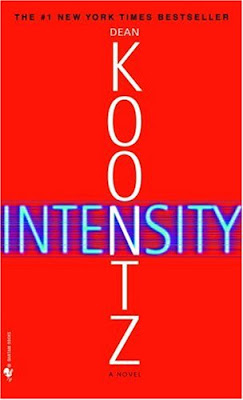 Some of Dean Koontz's books are quite good, others...not so good.  Intensity was a book I started with some excitement but this slowly turned into depression as I realised I was stuck with a book to read that was very boring.

Intensity is the tale of a girl versus a serial killer.  Troubled Chyna Shepherd had gone to stay at her best friends parents house for a vacation, however the very first night a crazed serial killer called Vess turns up and kills everyone.  Chyna manages to avoid his notice but ends up trapped in the back of his camper van.  At first her only thought is escape but after witnessing a murder at a service station she realises that the crazed killer has a young girl locked up in his basement.  Chyna makes it her mission to stay with the killer until he returns home and then free the girl and call the Police on him.  Things don't go quite to plan though as Vess is a very smart man...

The trouble with this book is that just over half the book is dedicated to the drive to Vess's house.  All this time Chyna is hiding and Vess is driving and not too much happens making the books first part very dull.  Chapters and paragraphs switch between Chyna and Vess, with Chyna you get long flashbacks to her childhood where she was constantly surrounded by danger, while the parts with Vess try to show you his view of the world and make you understand why he does what he does.

Vess is not a likable character which I guess he shouldn't be as he is a sadistic butcher who delights in breaking his victims and hearing them plead for their lives. He sees himself as a wolf and everyone else as sheep and delights in the way he is able to blend in with normal people.  Chyna on the other hand is kinda annoying and her constant flashbacks to her pathetic childhood are not appreciated.

The book picks up in the second half which is set at the killers house out in the country.  He has a lot of high tech security as well as a pack of amazingly well trained attack Dogs in the form of 5 Dobermans, though a later plot twist does kinda give an excuse to how he has been able to train these dogs so well.  Plot spoilers abound here but Chyna ends up captured by Vess who promptly leaves giving her 6 hours to escape her chains, rescue the girl locked in the basement and flee the property before he returns from his day job.

It is hard to recommend the book when half of it is an utter snore-fest, and to be honest I am quite happy that it is over and hopefully choose my next book to read more wisely.

Posted by Daniel Simmonds at 04:59