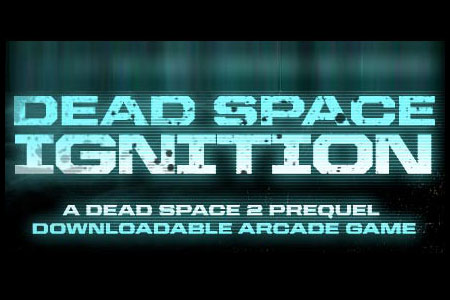 Dead Space: Ignition is an interactive comic that was released on the run up to the release of Dead Space 2.  The comic is mildly animated with full voice and soundtrack.  The comic takes place just before the start of Dead Space 2 and takes place on the Sprawl (the location in that game). There are giant plot spoilers ahead!

The game follows the exploits of an engineer called Franco Delile and his security guard girlfriend Sarah.  They are carrying out a routine repair on the Sprawl (a city on a moon of Saturn) when there starts to come reports of an outbreak of some disease.  Monsters start appearing killing all in their path.  Franco and Sarah head to the medical wing as they feel that they will be able to help the people there and also that in the event of an evacuation the medical wing would be one of the first to be evacuated.  On the way Franco receives a bizarre message on his pager saying 'HE AWAITS'.  Sarah is killed leaving Franco on his own.  He heads to a Psychiatric ward and the game ends with him releasing Isaac Clarke (the protagonist of Dead Space 1 and 2) from a stasis chamber. 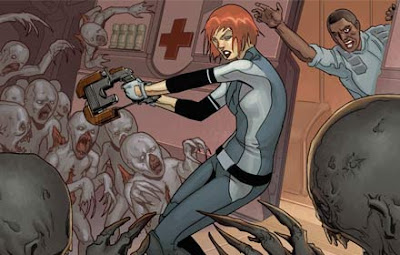 The comic is multi branched with there being three different branches though the comic such as having the choice to restore lights to a section of the Sprawl or to go and deal with a hostage situation.  Each path leads to the same ending but I would say it is worth playing all the routes as they feature lots of different scenes.  No matter what path you take Sarah ends up dead and the game has just the one ending.

There are three mini games encountered time and time again to split up the comic. The first of these is a game where you control a coloured line and must race it through an obstacle course and beat other coloured lines, this is the best of the three but quite basic.  The second mini game sees you in a tower defence style situation where you are attacking rather than tower building.  You can beat all these just by spamming the buttons so is always very easy.  The last game sees you needing to match up coloured lasers using mirrors.  It is the most complicated of the games and also by far the most boring and time consuming. 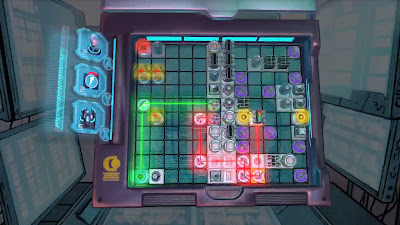 The comic looks pretty dreadful with the whole look being unfinished and rushed.  The mild animation is mostly terrible and makes everything look really bad.  Maybe it is just that it is on a big screen but the whole art direction is very basic and sloppy.  Coupled with the fact that the mini games are so bland and awful leads to not a very good game.  There is replay value in the alternate paths, and masses of the terrible mini games to do but even at 400 Microsoft points this is abysmal.  One good thing is that the sound effects and menu design is very similar to the main games.

If your into the Dead Space universe then this is unfortunately essential as it does provide some back story to Dead Space 2 but otherwise avoid like a zombie plague.

Posted by Daniel Simmonds at 03:36