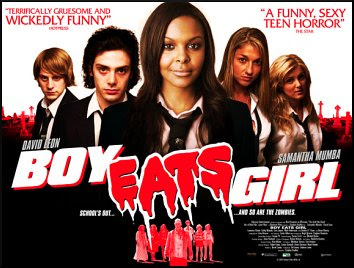 Boy Eats Girl is a teen horror flick that describes itself as a cross between American Pie and Buffy the Vampire Slayer.  I have to say that did not make me want to watch it but luckily it is nowhere near as bad as that.  Despite looking like it was going to be an American based film it is actually Irish made, it just wishes it were set in America.

David Leon stars as Nathan; a high school student who on the night he was to reveal to his long term crush Jessica (Samantha Mumba) that he loved her is accidentally killed by his mother.  Remembering a book on Voodoo she discovered in a secret crypt in her local church she uses the book to reanimate her son.  Not knowing he has been reanimated as the living dead Nathan heads to School where a fight with the school bully Samson leads to Samson being infected and turned into a zombie.  Quite soon the whole Town is over run with zombie students and teachers and it is up to Nathan (who has still retained his humanity) and his school friends to sort out the whole mess. 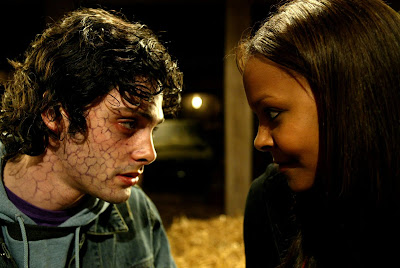 The film desperately wants to be American.  The whole School atmosphere and setting is identical to those found in American films but feels out of place in Ireland which doesn't have a similar school system.  Half the students who are supposed to be under 18 must be around 30 years old and look that age also making it all seem a bit odd.  Leon is a good actor and conveys the transition into zombie well but co-star Mumba is not a good actress in the slightest.  The film is held up by the double act comedy sidekicks of Diggs and Henry who provide comic relief all the way though. Diggs especially has some laugh out lines.

The zombies are of the running kind and are mostly students.  Only the lead zombie Nathan is able to behave rationally, the other zombies are mindless apart from being able to hunt out people they knew in life.  A sub-plot with the Nathans mum has her finding a cure for the zombie infection but out of everyone only two people actually get the cure, the rest are butchered mostly in a scene involving a threshing machine which goes to Brain Dead levels of over the top gore. After the survivors experience I am pretty sure they would be messed up for the rest of their lives! 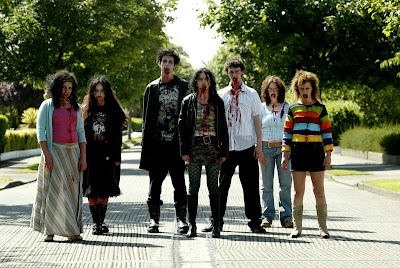 The American Pie references come with lewd jokes about penises and gay people which were not needed or funny but luckily did not come to dominate the film due to a lot of the obnoxious characters being killed.  The film was OK but it is off putting to see old actors trying to play school students, as well as the Americanisation which was not needed (least the characters kept their Irish accents and didn't attempt American ones!). Quite a lot of blood and gore and some decent lines in places but the story is really nothing new.

Posted by Daniel Simmonds at 03:02