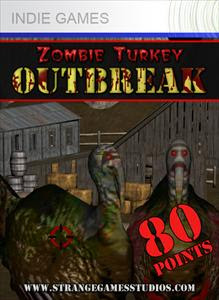 Another day another Zombie Indie videogame review.  Ages ago back in the days of the Playstation and N64 a South Park FPS was released.  The game was quite terrible and unplayable but it did feature zombie Turkeys a lot.  This game also features zombie Turkeys but due to the games cheapness they don't outstay their welcome.

The story is displayed via a loading screen which features a newspaper telling a story of a farmer who went insane and bio engineered his Turkeys (with a combination of drugs, steroids and energy drinks) to attack the local populace.  You play as a Soldier sent to the farmers farm to stop the zombie Turkeys before they leave the place.  The initial loading times are kinda long so you get plenty of time to read the newspaper story explaining things. 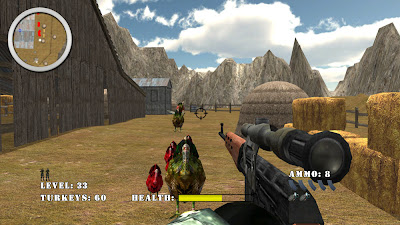 You start the game armed with a pistol with infinite ammo.  Every few levels you clear unlocks a new weapon such as machine gun, shotgun, Uzi, sniper rifle etc.  After level 11 there are no new weapons to unlock.  Each level takes place in the same location; around a barn, each level features more and more Turkeys.  The Turkeys come in 3 types, there are the basic zombie Turkeys, smaller zombie Hens, and big Turkeys who vomit bile at you.  The zombies attack mostly by pecking away at you.

The game really doesn't look too bad, and the zombies die messily with brains and intestines splattered about (slightly ruined by the way the enemies vanish once killed).  Apart from a few clipping issues it controls well, though once while playing the game crashed which was kinda annoying.  The soundtrack during the game is ok, made better by Turkey noises included.  The title screen music is really good, very catchy. 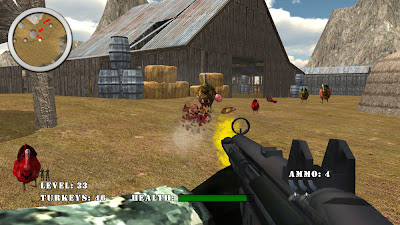 At 80 Microsoft points the game is cheap and worth purchasing despite the rather brief experience on offer.

oh yeah, you the man...
http://izombielover.blogspot.com/2011/02/cool-dudes-giving-other-dudes-cool.html