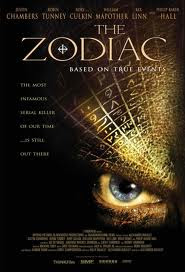 The Zodiac Killer has always fascinated me, mainly due to the fact that he was never caught.  For over 10 years he sent letters to the Police bragging about the murders he had committed, reckoning he had killed up to 37 people (though only 5 have been confirmed, with a further 4 murders possibly done). He is a mystery that will probably never be solved and also kinda lame to be honest.

The Zodiac is set in the late 1960's during the first of the Zodiac Killers murders, it follows Inspector Matt Parish (played by Justin Chambers) who has been put in charge of bringing the serial killer to justice.  The strain of the hunt starts to impact on his family life as his marriage falls apart whilst he is obsessed with catching the killer. 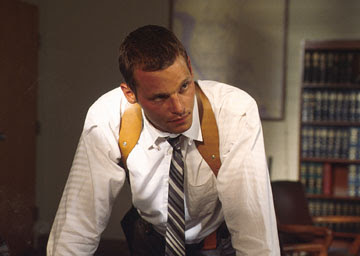 Not a lot happens in the film.  The problem with making a film about a serial killer who was never caught is that there is no exciting pay off.  Fact wise the film stays pretty rigidly to true events but I was hoping for a showdown with the serial killer, maybe with the Cop killed by him to explain how he was never identified.  Unfortunately this doesn't happen, Parish spends the whole film on a wild goose chase going after the wrong guy, the film ends with his career in ruins.  His son has better luck which is kinda funny as he is only 10 years old.  The kid (who acts like a 60 year old throughout) gets into the more bizarre aspect of the killer such as the relations between the murders and solar events but his junior detecting is not appreciated by anyone.  Perhaps if he didn't look so damn miserable for the films duration someone may have humoured him.

The Zodiac killer is played by Marty Lindsey though you wouldn't know this as he is never shown in full, just shadowy images, shots of his back and legs, and montages of him preparing weapons for his next murder.  He has zero presence in the film and just does not come across as anything good or bad, just a walking plot device. 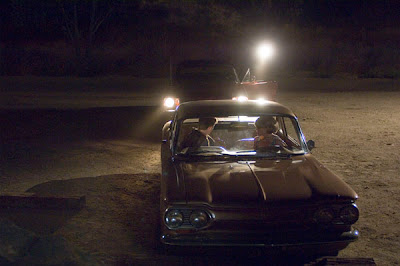 I wanted this film to be good but it is bland at best.  It has a nice ending with a real life quote from the Zodiac letters saying how the killer had wanted a film made about his events, but looking this up I found that the letter saying this is widely regarded by experts to be a fake Zodiac letter so lessons that impact.  Not really recommended.

Posted by Daniel Simmonds at 04:45