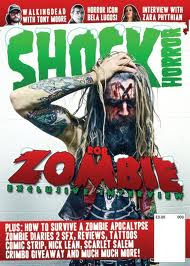 I have just finished reading Issue 3 of the new British horror mag Shock Horror, another quality issue.  I was looking forward to this one due to an interview with one of my favourite all time directors Rob Zombie (his music is damn good also!)

The issue again was well written with nearly all the articles being quite interesting to read.  The issue was quite zombie heavy with the film reviews section having about half the reviews about zombie films, the comics review section was also full of zombies, and they even crawled onto the book review section.  Just the one videogame review this issue; Dead Rising 2, as always I don't really rank the game reviews but that is just be being a games snob I fear!

More Zombies turned up in the special effects column which focused on Zombie Diaries 2 this issue (Zombie Diaries was terrible so hope this one is better!)  After this came an interview with the amazing Rob Zombie which while quite interesting revealed nothing special other than the fact that Zombie is not going to make another Halloween film.

Zombies continued their dominance of the issue with an interview with ex The Walking Dead comic artist Tony Moore.  I love the style of his art, cartoony yet somehow realistic also.  There is an interview with the director of upcoming zombie flick Invasion of the Not Quite Dead which was sorta interesting but sadly lacking in any details whatsoever of what the film is going to be about.  Hopefully an interview closer to the films release will happen so that any information about the film can actually be revealed.

As always the Haunted Tattoo section made its appearance once again, this time focusing on...zombies! Definitely a theme running in this issue.  The last feature of the magazine was a retrospective on Hammer Horror's  The Plague of the Zombies, a film I have still sadly yet to see.

Slotted in around all this zombie madness was a look at the life of Bela Lugosi (once again a great part of the mag, very interesting), the as always boring Directors Chair segment (just does not appeal to me), the fun but random Scarlet's Sanctuary column (always full of nice photos) and the very brief comic strip (at this rate of 5 panels an issue it is going to take several years to finish up the basic cannibal storyline going on).

A whirlwind tour of the magazine I know, but another good issue, well worth buying!
Posted by Daniel Simmonds at 06:29