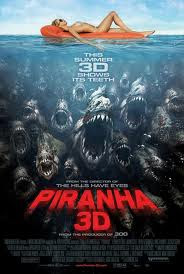 I narrowly missed seeing this at the cinema but got to see it the other day.  It is the 2nd remake of the late 70's horror film of the same name.  This time around the film is done in 3D, while I never got to see it in 3D it looked to all intents and purposes like it would have been bad 3D; all things being thrown into the screen.

The film takes place in an American lake side Town during Spring Break (apparently a celebration where teens party and take their clothes off a lot).  Jake a boring kid is due to babysit his two young siblings while his mother (the Sheriff of the Town) does her thing.  Getting an offer by a sleazy Pornographer to guide his boat to the best looking locations on the lake Jake abandons his annoying charges and heads off for a day of sleaziness.  Unknown to the inhabitants of the Town a localised earthquake has opened up a fissure under the lake where prehistoric Piranhas have been living for over two million years, surviving by cannibalism.  Soon the deadly fish are sweeping the lake looking for food and it isn't long before the 20,000 partying students become fish food.  Jake, his mum and their friends must now find a way to stop the multitude of terror that is swarming the lake. 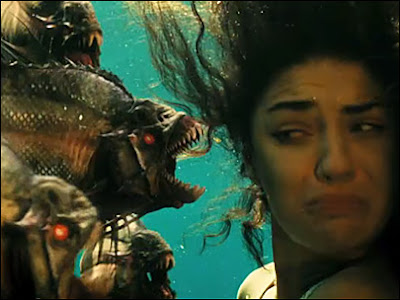 The film is very bad, it is full of violence and scantily clad females.  Apart from a few kills it is over half way through the films running time that anything starts to happen.  The first half is mostly taken up with partying students, lots of shots of topless women, and a few lesbian scenes courtesy of the sleazy Pornographer and his 'wild' girls (including for some reason Kelly Brook).  At about the half way point though the pay off is realised as the annoying as hell students start to get eaten quite rapidly and it isn't long before the lake is red with blood and partially consumed victims are flopping around left, right and centre.

The effects are quite good in places and terrible in others but the partially eaten look is gotten down quite well with many victims being skinned alive in rapid succession.  The best scene is the blood bath at the student party where panicking teens are butchered by the Piranhas while the Police try in vain to rescue them by shotgunning randomly at the little terrors.  Ving Rhames in a wasted role as a Cop sacrifices himself to save the worthless party goers by waving a boats propeller into the screen (a 3D effect wasted on me). During all this a crazed man gets in a small boat and kills legions of people while trying to escape, eventually getting foiled when a poor girls hair gets caught in his propeller leading to her face being pulled off and zombie like droves of people toppling his boat over.  Meanwhile on the boat of Porn the disgusting director gets his comeuppance when his Penis is bitten off and eaten in a grim scene. 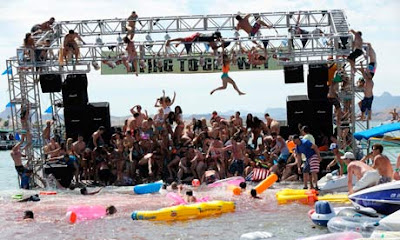 The plot is very basic and just serves as a device for mayhem and nudity to occur.  I found this film quite fascinating in a car crash kind of way.  It is a terrible film but there's no doubt in my mind that anyone who went to see this would have expected what was provided.  It is brainless, sleazy and does what is expected of it, but does all this in a knowing way.  Christopher Lloyd has a bit part though he seems to be playing Doc from the Back to the Future films.  Not very good, but entertaining with the amount of tongue in cheek bloodshed in it.

Posted by Daniel Simmonds at 11:30