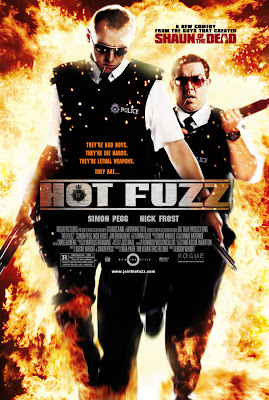 Caught Hot Fuzz on TV the other day.  Despite the film being brutally chopped up it was still a great watch and made me fall in love with it all over again.  Hot Fuzz I feel is a vastly under rated film being unfairly compared to the better Shaun of the Dead.  Like that film though it is a grower and requires repeated viewings to truly love it like it deserves.

Hot Fuzz is the tale of a super Cop from London; Nicholas Angel who is forcibly relocated to a sleepy countryside Town of Sandford due to making his work colleagues look bad with his amazing policing.  Angel is horrified to be working in such a peaceful Town but begins to discover a sinister side to the idyllic streets.  When a series of deaths are attributed to freak accidents Angel starts to be convinced that they are instead murders by a serial killer and sets out to prove this.  With the whole Town against him the only person he can trust is his dim witted partner Danny Butterman.  Is Angel a man going insane or is there really a grand conspiracy enveloping the whole community? 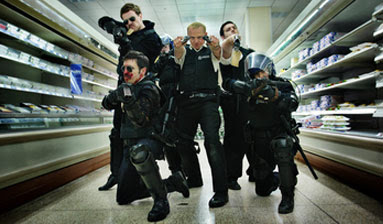 The film is a comedy that riffs off of buddy Cop films such as Bad Boys as well as is a cinematic take on crime shows such as Midsomer Murders.  The horror element comes into play with the creepy serial killer; a cloaked figure who resembles the Scream killer from the Scream films.  The killer is quite violent in his methods with beheadings, explosions, and even a pair of secateurs though the throat as murder types.  The film changes half way though into something else entirely.  With the lid blown off the whole conspiracy, Angels world turns into a place where absolutely everyone is after his blood, him against a Village of the damned.

The comedy is solid throughout and retains its humour on repeated viewings.  As always some does fall flat but it does a good job of balancing the fun with the action and boy is there a lot of action.  A wonderful film that shows that not everything that glitters is gold and that everyone has secrets.  The film looks fantastic and the acting is of a nearly universally high standard featuring many famous faces in the world of comedy (Bill Bailey, Martin Freeman, Simon Pegg, Nick Frost, Kevin Eldon and Jim Broadbent to name a few).  Definitely a film to have in your collection!