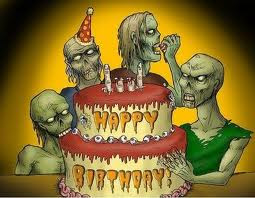 Another month and I am still penniless and jobless but luckily I still have a house full of things to review in the name of Horror.  My birthday this month, so I will be another year closer to my eventual demise!

I am playing through Final Fantasy XIII, Dragon Age: Awakening, The Legend of Zelda: Spirit Tracks on the RPG front, all are fantasy based RPG's but all feature monsters at some point.  Burn Zombie Burn is still taking up some of my time on PSN, while over in the world of XBLA I am still battling through the quite boring fantasy based puzzler Puzzle Quest 2.  On the PC I am playing Beneath a Steel Sky (a Sci-fi point and click adventure) and the FMV horror cheese fest Phantasmagoria.

I saw the trailer for Scream 4 recently, it looks to be as bad as the previous 3 films (the only good Scream film was the original in my opinion).  I don't really know what horrors are coming out at the cinema this year but I still have a legion of horror VHS and DVDs to watch.  I am half way though the final season of the fab Battlestar Galactica so a review of the show will follow watching that.

There really is not more to add this month, though there was one thing...I found a mysterious sinister email in my inbox welcoming me as a member to a bizarre club named Fright Club.  Horror and fright awaited me at the site, I am not even sure if I should be mentioning the site as the first and second rule of Fright Club is 'Do not mention Fright Club' (now where have I heard that before?)  Still I am now a member of the elusive Club as can be seen by my badge proudly displayed at the top of my site!
Posted by Daniel Simmonds at 10:25

Happy [pending] Birthday... and thanks for the mention, i too make you a frighter!