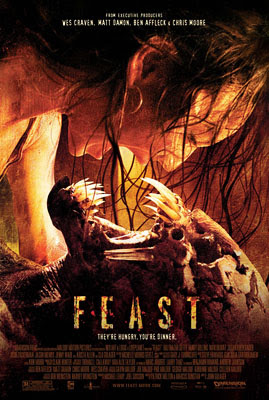 Feast is a film I have owned for a while now, I picked it up from a Supermarket bargain bin so excuse me for not taking time to watch this ace film earlier!

Feast takes place at a remote bar in the middle of the Texan desert.  The patrons are having a usual night of drunkenness and misery when a stranger bursts into the place.  He explains he is being chased by monsters and that everyone needs to lock down the bar.  Moments later a monster sticks its head through the window and ends his life.  It seems after one of their number was killed in a road accident a group of strange creatures have become determined to kill all humans they can find.  The people of the bar have to work together to barricade the building and survive the night whilst under constant attack by the strange, violent monsters and their offspring.

The film is set in the one location and apart from a few times the film never leaves the building the survivors are barricaded in.  It reminded me a bit of From Dusk Till Dawn. The film has a vein of black comedy running through it which is more hit than miss.  Each character has their own bio that pops up on screen to introduce them.  These bios are painfully unfunny. The rest of the humour actually works, it comes mostly from the interactions the various characters have, as well as the sordid way the monsters act.  For the most part the characters are not that likable; the corrupt owner of the bar, a travelling motivational speaker, the local looser, a single mother as well as other stereotypes.  It is funny how some conventions of the genre are played with though such as when one of the characters starts heavily quizzing the old lady of the group on whats happening 'your old, you must have heard some sort of tale or local legend in your lifetime! Tell us what you know!' (to paraphrase).  It sure seemed funnier within context of the film!  Also the way the main Hero is killed within minutes of arrival (and just after his hero speech) was fresh.

The monsters are quite cool looking.  For the most part you don't get to see them much and when you do they look fake.  There is a reason they look fake though as they are dressed in roadkill, and wear animal skulls over their heads, it is only late in the film you see their true form which is far more gooey and scary.  The monsters seem quite obsessed with sex.  Early on in the film a poor character gets slimed by one of them becoming covered in monster semen which leads to the character being covered in maggots (live maggots) for the films duration (I hate insects, they turn my stomach). The child monsters hump everything they come into contact with, and the male monster gets its member sliced off with a hatchet at one point.  The film has lots of gore, people getting utterly covered in projectile goo, blood and other bodily fluids.  Quite quite icky.  There is violence aplenty with people getting limbs lopped off, heads crushed, eyeballs puled out left right and centre, it is all over the top though and quite entertaining! 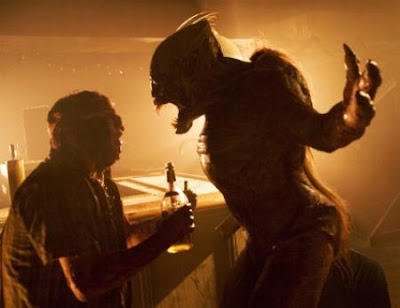 Sure the plot is nearly non existent but in a film like this a plot isn't really needed. The film was successful enough to get 2 sequels which I am quite interested in seeing as this was a well made, fun and exciting film.