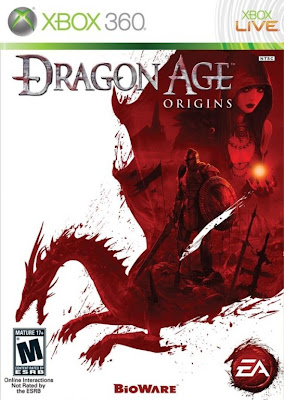 I finally completed Dragon Age: Origins the other day, it took me around 50 hours to do.  It took me a long time to get into this game and at first I was worried that I had been too quick to purchase all the games DLC before seeing if I actually liked the game.  It was only after I changed the games difficulty to Casual after struggling on Normal for 15 hours that I fell in love with the game.

Dragon Age: Origins is a fantasy based role playing game set in the Kingdom of Ferelden.  The game features Elves, Dwarfs, Dragon, Magic and the other usual fantasy traits.  You start the game with one of six possible origin stories whether it be a Castless Dwarf in the underground City of Orzammar, an Elf in an Alienage in the capital City of Denerim or another starting story.  Each origin story ends with your character being recruited into the Grey Wardens.  The world is about to enter it's 5th Blight.  The Blight is an event when the legions of Dark Spawn rise up from under the ground at the command of a Arch Demon (said to be one of the old Gods).  Blights can only be ended when the Arch Demon is slain and the Grey Wardens are the only people able to slay them.  Political intrigue leads to the King of Denerim being slain and the land torn asunder by a power hungry lord called Loghain who seizes control.  Your aim in the game is to visit the lands and recruit each main race to join your army so that you can oust the tyrannical Loghain and lead the people of the land into war against the Darkspawn. 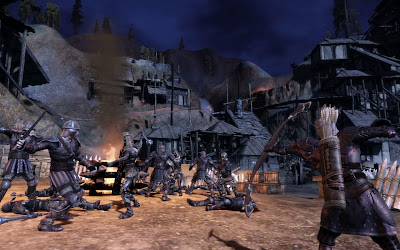 The game is very fantasy based but it is done really well and feels quite fresh despite being so familiar to a hundred and one fantasy books.  It is quite a dark story with heaps of Demons, Monsters and Ghosts between you and victory.  Much like the Elder Scroll games you get a main storyline to follow but also lots and lots of side missions that involve anything from rescuing people from dank prisons to informing soldiers wives of thier new found widowhood.  The main missions seeing you travel to the various lands of the world to get the support of the various races.

The game is semi real time in that you issue commands to your party but do not have direct control of their actions.  Your team of 4 can have commands programmed to them such as healing any team mate who falls under 50% health.  There are a lot of members you can recruit including a Golem, a War Hound, as well as more traditional characters such as rogues and mages.  Your behaviour in missions grants you good or bad points with your team mates which can result in them leaving your party or even deciding to attack you.  By the games end I had killed a possible team mate before I had the option to recruit her, and I had sent one of my more annoying team mates off to be executed (he was quite irritating, he deserved it!).  The games difficulty comes from the fact that you need to keep a close eye on the health of all your characters and quickly be able to flip between them to ensure they are performing well.  Casual mode took a lot of the stress off of this area of the game while still being fun to play. 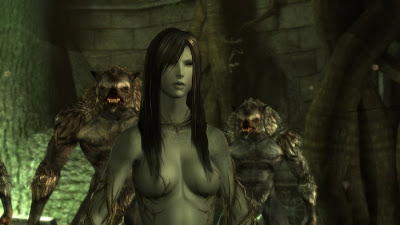 The main enemy you face are Dark Spawn.  These are Goblin type monsters that really reminded me of the Lord of the Ring Goblins.  Zombies make an appearance in a mission where the Town of Redcliffe comes under attack each night by hordes of undead which was quite ace.  The Elves of the forest are in a feud with a roving band of Werewolves which was another more horror based mission.  The Circle of Magi's Castle mission sees you battling through a tower in which the veils of reality have been ripped open and Demons have invaded, another cool horror mission.  A lot of the game is pure fantasy but horror does make itself known in places, as well as real life horror like rape, torture, madness and cannibalism.

There is a lot of DLC for this game that I had on my play though but there is also a lot of stand alone DLC which I shall no doubt review at a later date.  A very fun, exciting fantasy RPG that is quite hard if you are not prepared (prepared to put the game on easy that is!)  Dragon Age 2 is out later this year, I am quite interested in getting that based on the fun I had with this.

Posted by Daniel Simmonds at 12:01