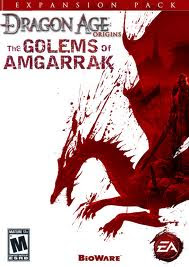 The Golems of Amgarrak was one of the last DLC missions to be released for Dragon Age: Origins.  The DLC was advertised as being very hard, what wasn't advertised is the fact that the stand alone DLC feels very like a survival horror game if it were set in a fantasy world.

The DLC is set in the Deep Roads (massive underground Dwarven tunnels).  A Dwarf has hired you to find his brother whose team went missing when they left to find a laboratory where the secrets of Golem creation were being studied.  Upon finding the laboratory you become locked in and soon find mysterious levers that move you to different plains of existence as well as nightmarish creations after your blood.  Before the Golems had been created out of stone and metal but the experiments in Amgarrak were looking to create Golems out of stitched together flesh. 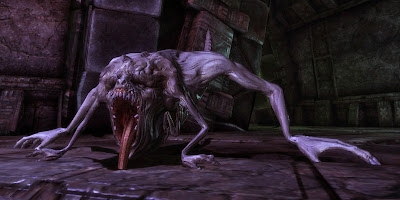 The first part of the DLC sees you en route to Amgarrak which sees you in typical Darkspawn fighting mode.  You have a team of 4 as usual, including a Golem and a Bronto (a large beast).  Arriving at Amgarrak sees the horror begin.  It seems the person in charge of recreating Golems was quite the mad scientist, dotted around the lab are various diary entries detailing the insane work the Scientist was doing and the many victims of that work.  At first sentry Golems are the main enemy but upon finding a strange switch you are transported to another dimension full of Skeletons and Zombies.  Eventually you find that to be able to leave the nightmare lab you will have to destroy a creature called The Harvester.  Keeping horror conventions going the DLC ends on a shock twist.

As with the rest of Dragon Age I played this DLC on Casual mode so it was not too hard, the end boss and a room full of Golems were the only hard parts I got to.  The DLC being horror based was a pleasant surprise so all in all a good standalone game full of corpses and mayhem.

Posted by Daniel Simmonds at 05:28