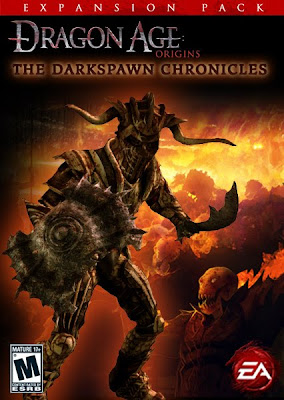 I know it is yet another Dragon Age review!  You may be pleased to hear that out of the remaining DLC I will only be reviewing this and The Golems of Amgarrak. Leliana's Song DLC centres around Humans, while Witch Hunt is Dragon Age by numbers and nothing special at all.

The Darkspawn Chronicles takes place in an alternate timeline to that of Dragon Age: Origins.  In this timeline the main character from Origins died and so it was down to the Grey Warden Alistair to unite the people against the Darkspawn threat.  The game takes place during the end of Origins at the assault on the City of Denerim. You play as a Darkspawn; a Hurlock Vanguard.  As you fight through the City you get new objectives given to you telepathically by an Arch Demon. 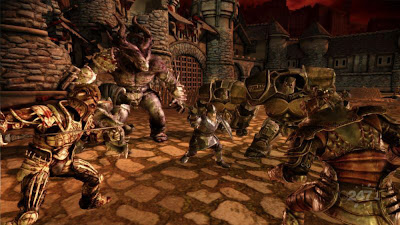 The game is far more combat based and plays more like an action brawler than a RPG.  You can't level up and there is no downtime, it is just one big fight from the start of the DLC to the end.  You are able to Enthrall up to 3 other Darkspawn to fight with you.  Ogres are able to smash barricades, Genlocks are basic fodder, while Shrieks are able to use stealth to creep past weapon emplacements.  Being a Darkspawn your missions mostly involve killing; whether it be butchering innocents, destroying enemy blockades or killing key characters from Origins.  By the end of the DLC I had killed all the main characters, quite satisfying, especially the more annoying ones (e.g: Alistair!)

The DLC lasts around an hour and uses no new locations at all.  Being mindless monsters the plot is kept to a bare minimum.  It is fun enough but really could have done with some new locations.  It was fun being the bad guys for once.

Posted by Daniel Simmonds at 04:00