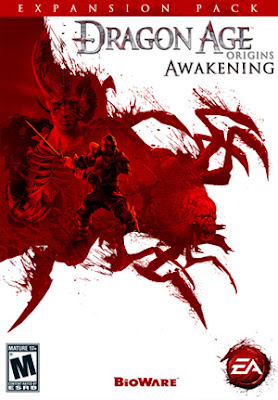 Awakening was the first and main stand alone expansion for Dragon Age: Origins.  It provides around 10 to 15 hours of game play and lets you import your character from Origins.

The game takes place 6 months after the conclusion of Origins.  Usually after a Blight has ended the Darkspawn retreat once more to the underground.  This time the Darkspawn have not gone away, they are still roaming the Country and worse they seem to be getting smarter.  The game starts with you arriving at the Wardens Keep where Darkspawn have launched a surprise attack.  Discovering Darkspawn now have the ability to formulate plans as well as talk you are tasked with investigating the land to discover just what is going on.  This leads to you discovering a Darkspawn civil war between two intelligent Darkspawns; one calling himself The Architect, the other calling herself The Mother. 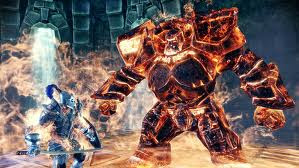 The game is much more compact than Origins and sees you in a small corner of the Country.  All new locations are used for this expansion and the game as a whole has a more horror theme to it.  You have access to mostly new party members which include a disgraced Noble, a member of the Legion of the Dead and even a Spirit from the Fade that has found itself inhabiting a corpse (a zombie technically).

The main plot has you exploring four distinct locations.  Knothole Hill leads to the Dwarfen Long roads.  These were very epic areas in Origins and again a Lord of the Rings vibe is gotten here as you fight legions of Darkspawn in underground Cities.  The Wending Woods is a vast forest area where a mysterious being is slaughtering anyone passing through, while the last main quest location the Blackmarsh is a fantastic Gothic trip through a swamp to a deserted village whilst fending off mutant Werewolves and Demons from the Fade (the Ghost World)  The locations can be tackled in any order and are all fun to do though the Blackmarsh is the most fun of the locations.  When these are all done you get to descend into the Earth to battle an unholy terror in a mission reminiscent of the works of H.P Lovecraft. 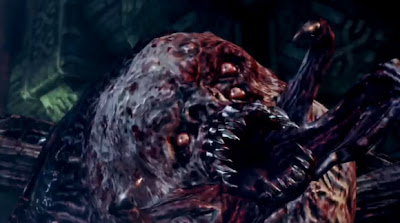 The game really benefits from not being so open, it gives a more driven feeling to proceedings.  New enemies are plentiful and include several new Dragons and various new types of Golems as well as zombies, wolves, and creepy child faced worm monsters (spawned by the multi breasted Mother!).  The graphics are better than those of Origins and the voice acting stays at its high level.

If you liked Origins at all then I suggest you play this.  More of the same yet at the same time feels fresh and different and benefits by the infusion of horror.

Posted by Daniel Simmonds at 04:31