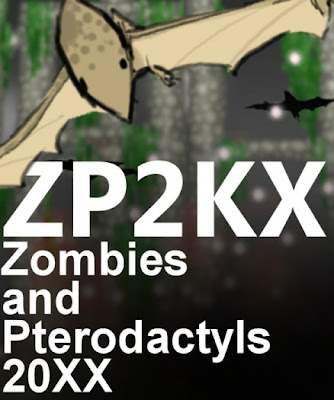 ZP2XX is the sequel to the bland ZP2K9 that was released early on in the Indie channels life.  I didn't review that (though I was sure I had), it was a 2D Arena Deathmatch game in which several players could run around trying to be the person with the most kills.  Zombies only appeared in the game as power ups and as such I did not like it, perhaps more due to the fact I don't like Deathmatch games.  Still everyone else seems to like it as it got high scores.  Now a sequel has crawled out of the woodwork.

The brief story says something about Pterodactyls are bringing warriors together to fight in vast arenas (?).  That's about it, which ever stage you choose sees you enter in the claws of a giant bird who drops you off before exiting.  That is where the Pterodactyl part of the title comes along.  The game is designed for online play, single player just letting you fight against bots.

I really don't want to talk about the game much, it looks beautiful like something out of a water colour children's book, there are a choice of skins to choose from, the music is generic rubbish and there are plenty of different guns and swords to choose from.  Control is via the twin sticks and your character can run up walls and across ceilings as well as use a jet pack.

There are no Zombies! Oh I'm sure they are included somewhere in the game but not anywhere I was able to see in my brief tour of the thing.  Perhaps they are stage specific, or only turn up when time is due to run out, but I think its a bit of a con to have Zombies in the title of your game and then have the brain dead things be like gold dust.  Maybe the fighters are supposed to be zombies? I really don't know, but what I do know is that this game is not for me! 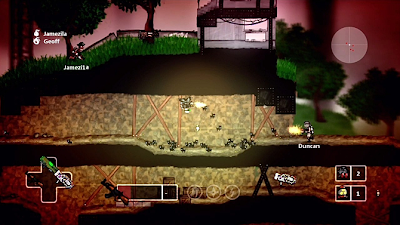 A well made game that looks amazing.  If Deathmatch is your thing then get it, it's only 80 Microsoft points after all, but it is just not designed for the likes of me.

the zombie hunt should have been an infection setting i like the flashlight deal thst makes it all the more suspencefull if some one die by a zombie they become one that would be great with all the camping spots on the map. i like the nuke mode and the nuke nades and the glofish that eats you well worth 80 microsoft points ill give this game a 9 out of 10 for only being an indie game. Good Game.