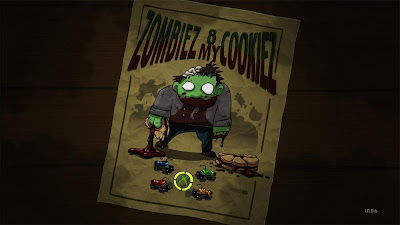 The title for this game alone nearly made me delete it, the title exemplifies everything that is wrong with the X-Box Indie games channel being as it is made up of text speak, ugh.  I decided to play it anyway; (an easy blog post!) someone needs to inform the masses of the glut of zombie games available in these times.

The game gives some text saying that zombies have gotten sick of eating nasty tasting brains and are now after tastier biscuits like cookies and chocolate digestives.  The game sees you and up to 3 friends as small Micro Machine sized tanks who must protect a bunch of biscuits on a plate from being dragged off the table top by hordes of cute titchy zombies.  If the zombies drag all the biscuits away, or the biscuits all get eaten then it is game over. 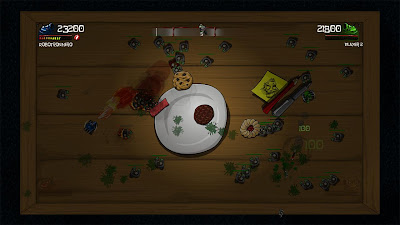 The game looks very good, the graphics similar to the style of Castle Crashers, everything really solid looking and bright primary colours.  The music is very fitting, a basic droning ditty that is quite hummable.  The zombies are small on screen (the game plays out from a birds eye perspective) and so look really cute and friendly.  The way they all swarm around a cookie to drag it off and not harm your tank (all they do is hold onto the tank to slow it down) just makes them adorable!

The tank you control can utilise lots of different weapons.  You get your normal machine gun and rocket upgrades but also more fun stuff.  The flame thrower ignites all enemies it comes into contact while the electrocution power up makes your tank fry any zombie you touch.  There are 3 different game modes, first is Classic which just sees you protecting your biscuits.  Next is Frenzy mode which is the same as Classic but features hordes and hordes of zombies making it very hard.  Last there is a game mode that looks like it is player VS player, some type of American Football game maybe?  I was not able to access this due to playing on my lonesome.

I could imagine the game would be lots of fun in multi player but for me on my own the game was far too hard and I was soon left protecting a small chunk of cookie after everything else had been quickly dragged off.  At 400 Microsoft points it is very expensive for an Indie game.  A fun game but maybe too much cash is being asked for, for such a basic game.