Just when you think Zombie games on the X-Box Indie channel have gone as low as possible something like this comes along.  Read on to see if I am only joking, or if I am in fact just about to throw myself out my window in a fit of despair at this much maligned channel.

The game is set in 2011 with zombies having eaten the brains of every single Human in the world.  With no more brains to eat the zombies turn to a new food source; milk.  The game sees you as a zombie (or Pirate, Ninja, etc.) milking a cow.  You milk the cow by following the button presses on screen, so if a big Y appears on screen you press amazingly enough the Y button on the controller.  After a set time the cow kicks you away from it. 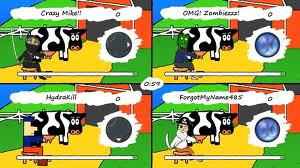 The game is up to 4 players for multiple cow milking tedium.  There is nothing else to the game, milking the cow following insanely boring button presses is it.  Once again Zombies are being used as a means to entice people to a game, the inclusion of other popular characters like Ninjas and Pirates shows Zombies just were not needed, a stick man could be there instead and the dreadful game would have lost nothing.

The game looks utterly terrible like something drawn in Microsoft Paint, the music is terrible, made up of simple beeping sounds.  The makers describe the game as 'fun filled' and a 'Party Game' but it is neither, it is Hell and makes me want to cry!

Posted by Daniel Simmonds at 04:17