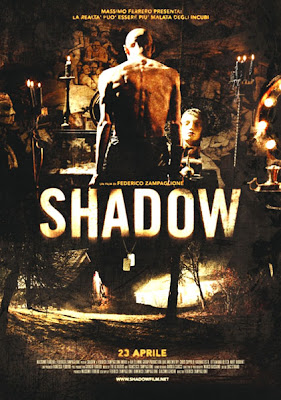 Shadow is an Italian horror film released in 2009.  The trailer was not particularly good and kind of gave away the half way point spoiler of the film.  As the trailer gives this twist away I feel no need to keep it hidden.

A former American soldier heads off on a cycling holiday to a place known as The Shadow; a large foresty mountain.  While there he gets into some trouble with two violent hunters.  They decide that him and his newly found love interest Angeline are to be their latest prey.  The whole genre then gets ambushed as both the hunters and the prey get captured and awake to find themselves chained up in the basement of a desolate facility at the mercy of some weird bald creature. 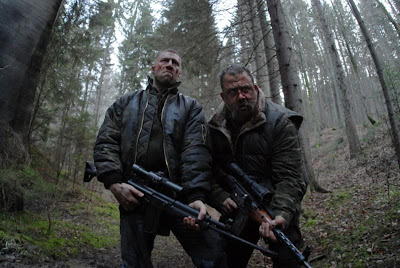 There are only a handful of characters in this film, none of which are particularly likable.  The main character David is flawed in that he behaves so oddly and feebly.  Just after avoiding death at the hands of some psycho rednecks he decides to initiate a love scene at a lake a few hundred yards from where the killers are still in hot pursuit of him, when being chased by a car later on he keeps incredibly feebly pleading with the driver to stop chasing him which was inadvertently funny and later on he is far too easily distracted by random pieces of junk when he should actually be concentrating on escaping a crazed lunatic.  These were just a few things I noticed that made his character irritating as Hell. 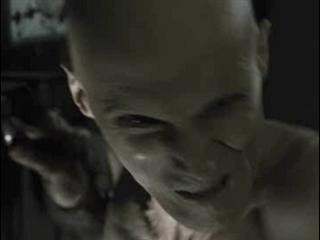 The bad guys are more interesting but not in depth of character as they are cookie cutter stereotypes.  The two hunters try and make themselves seem dangerous but just come across as idiots full of mean looks and random angry shouting,  there is nothing frightening about them.  The torturer guy is a better character though looks like he stepped off the set of Nosferatu being all pasty white and hairless.  There seems no particular motivation for his character and there is quite a randomness to his actions; one moment torturing victims, the next licking hallucinogenic frogs while the next driving big trucks that I'm sure his character would be incapable of doing.

There is quite a bit of violence and looks the part with good special effects.  The deaths all take place off camera, but there is plenty of people standing on nails, getting boiled alive, and in one particularly nasty scene someone gets their eye lid cut off.  Later on after watching the film a dear friend of mine decided to insert her finger up to the knuckle into my eye (well it felt like that anyway!) I couldn't help but remember the man with his eye lid cut off and think that something just as horrific had happened to me! 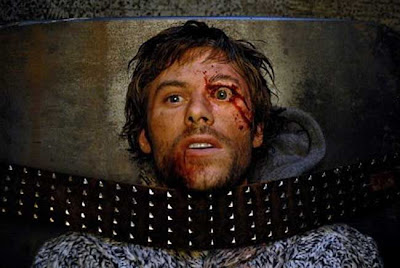 The film ends on a twist which while not that original I did not see coming.  It is kinda a crutch for the whole of what come before explaining away all the inconsistencies and discrepancies but is still a lame twist.  The film does look great with some beautiful vistas and grimy locations and features an ace score that mixes with the hallucinogenic feel of some parts of the film.  An ok film just nothing special, it just reminded me of the better Creep (pretty much the same plot but set in the London Underground) and felt confused in what it was trying to do.

Posted by Daniel Simmonds at 05:32