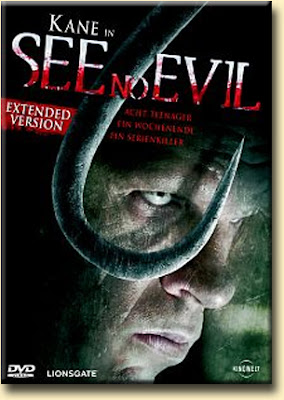 See No Evil is a WWE financed film starring the huge Wrestler Kane as the bad guy.  I had not heard anything good about this film but I really wanted to see what Kane was like.

The film starts with some Cops investigating a house in search of a serial killer.  One of the Cops is killed by the suspect while another gets his arm chopped off by an axe, but not before he shoots the offender in the head.  Four years later and the Cop is transporting a bunch of young offenders from prison to a huge dilapidated Hotel that had been closed 30 years previous after a fire there.  In exchange for a few days of cleaning the Hotel they will get reduced sentences.  Nearly right away it is apparent that there is a killer on the loose; the serial killer from four years back appears to be living on the eighth floor of the Hotel and wants to kill everyone who has invaded his home. 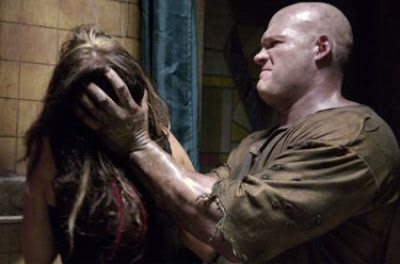 The plot is highly minimal, usually in these kind of films there is a gradual build up to the horror but here the horror starts quite soon into the film and just never stops.  I expected the offenders would be at the Hotel at least one night before hell brakes loose but with dead bodies littering the Hotel this wasn't really an option.  The offenders are all unlikable, annoying teenagers played by twenty somethings, and the Cops looking after them are equally unlikable.  I don't know what sort of prison they come from but the teens have phones, i-pods, drugs, alcohol, cigarettes etc which I'm sure they should not be allowed in Prison.

The Hotel is a great location, it looks really really ruined and really dirty and grimy; it looks like a place where bad things would happen.  It has quite a lot of wildlife as well such as stray dogs, rodents and plenty of insects.  Expecting the teens to be able to tidy the place in a few days is a joke as the building looks like it should just be pulled down being so over the top trashed. 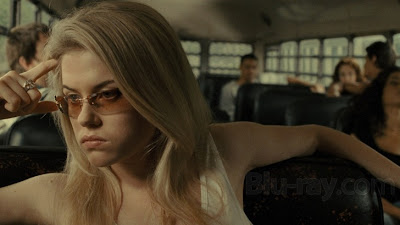 Kane looks really menacing, his 7 foot height helps this a lot as does his massive build and psychotic look.  Where ever he goes a bunch of flies follow, and he seems almost zombie like (when his head is injured maggots fall out of the fresh wound)  He is like a juggernaut albeit a slow one, walking through walls, hacking open doors and his lack of reach is made up for by his cruel butchers hook on a chain that he wields with deadly accuracy.  A favourite method of his is to swing the hook into a victim then drag them off to his lair to toy with later.  Part of his profile is that he removes his victims eyes (a series of flashbacks reveals that as a child his nasty Mother drilled into him that eyes are the gateway to the soul, and that all people are evil).  Towards the end of the film he speaks a little bit, but sounds so normal that I don't think he should have had any lines.

The film was boring me to death, it was really basic and generic but at some point about half way through the film the kills started getting quite inventive and made me laugh with joy.  One character gets flung out a window of the Hotel by Kane.  She plummets through a conservatory but survives due to a rope tied around her ankle (though her wrist snaps in half on contact with the ground), things seem kind of bad for her but get worse when a group of wild dogs appear randomly to eat her!  Another of the humorous deaths come when a girl gets her still ringing mobile phone stuffed down her throat!  Kane's death is also quite funny (it really is no spoiler to say the slasher of a slasher film gets defeated eventually) 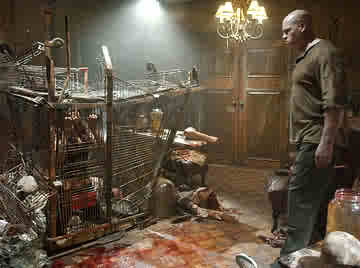 The film was almost criminally boring but does pick up in its second half, and so it is something worth while watching, but only just.

Posted by Daniel Simmonds at 03:07