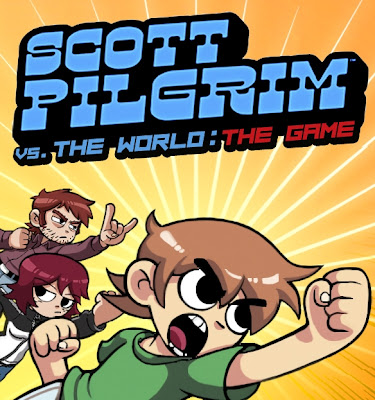 I have recently finished the ace retro looking Scott Pilgrim VS The World videogame.  Scott Pilgrim is a classic 2D scrolling beat em up for X-Box Live and PSN.  It features a unique heavily pixelated look and has an ace chip tune soundtrack.

The game is very fun and quite similar to River City Ransom in that your character can visit shops to buy goods to level up his or her stats.  The game much like the comic book and film revolves around Scott's battles with his girlfriends seven evil exes.  Each level of the game sees you heading towards one of the evil seven, all with the exception of the zombie themed level six.  Level six begins with you in a park, every now and again a shadowy figure appears in the background who causes you mischief (such as raining down random objects on you).  The level progresses to a graveyard where the shadowy figure summons zombies! 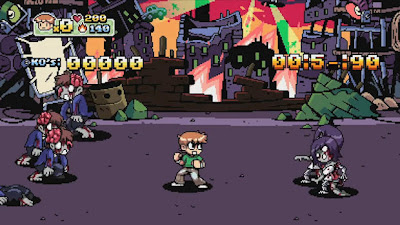 The zombies feature two types; male and female and both are suitably decomposing.  The male zombies seem to have a broken ankle, and have partial brain showing, while the females have a weird attack where they can jut out spiky bones from their chest (?).  When knocked over the zombies become invulnerable for a time until they have stood back up again. The level ends with a fight with the shadowy figure (who turns out to be Scott's evil twin Nega Scott).

The game itself is quite varied with other enemy types in the game including Ninjas and Robots among others. This is not a review but if it was I would give the game 5/5 as it is very fun, based on a fantastic property and is up to 4 players which I would imagine would be a load of fun.  At 800 Microsoft points it is not too expensive either. 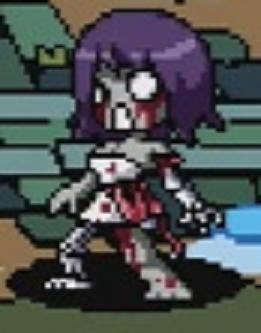 People say that nowadays Zombies are over used in games but I don't agree.  Zombies are ace! Embrace them.
Posted by Daniel Simmonds at 08:40