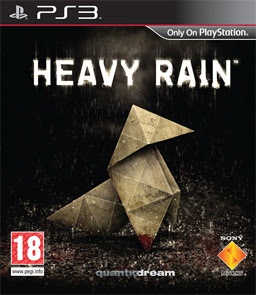 Heavy Rain is the very first proper PS3 game I have completed, I have a pile of over 10 PS3 games I have brought but not yet actually played.  Heavy Rain is the spiritual follow up to Fahrenheit; an X-Box and PS2 game that saw you evading Police after murdering a man in the games intro sequence.  The games are near identical in style being an adventure style game set in a ultra realistic world.

Heavy Rain sees you take control of 4 protagonists throughout the game.  The game is set in a City where a serial killer named as The Origami Killer is at large.  Each of the four characters has an interweaving plot.  Ethan is a 30 something Dad whose son has been kidnapped by the Origami Killer.  He has been given a series of increasingly deranged tests by the killer that he must perform, each successful test gets him one step closer to discovering his sons location.  Scott Selby is a Private Investigator who has been hired by the parents of the killers previous victims to bring him to justice.  Madison Paige is a reporter investigating the killings, while lastly Norman Jaydon is a F.B.I agent tasked with capturing the Origami Killer. 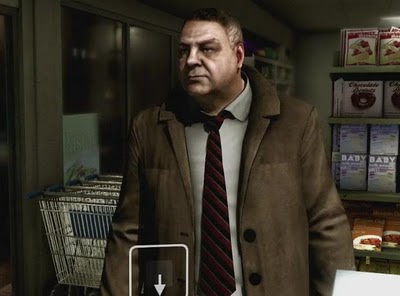 Much like Fahrenheit before it the game uses a series of context sensitive motions and QTE's to control the actions of the characters.  Nearly everything in the game world can be interacted with, symbols popping up to show you how to interact.  Opening a door for instance sees you needing to make a triangular motion with the right analogue stick (to symbolise turning the handle).  A lot of the game is this gentle adventuring but there is also a heck of a lot of action which plays out more as intensely paced QTE battles.  You get a fast collection of random button presses needed to be done to get your character through these battles, very frantic, stressful but also very exciting and fun.

The plot is very good, and much better than the insanity of Fahrenheit which ruined its crime story with the inclusion of giant bugs, super heroes and Aliens.  In Heavy Rain the games plot never leaves the crime thriller genre and is all the better for it.  It may in essence be a simple whodunit but it is told really well and leaves you guessing right up to the last scene.  The Ethan Mars section of the game plays out like a version of Saw, he is forced into ever more cruel tasks in order to proceed; driving the wrong way down a motorway, crawling over broken glass, mutilating himself, really is Saw the game (though there has been two actual Saw the games now).  Freedom of choice is one of the games biggest strengths.  The story plays out regardless of your actions but will change depending on your choices.  Even if your character dies the game continues, morphing itself to adjust for your input. 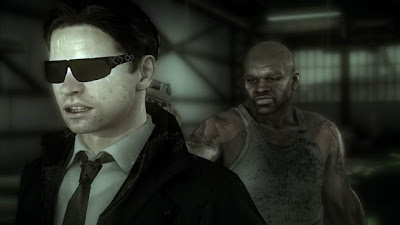 The characters are really well fleshed out, with the possible exception of the bland Madison Paige.  Ethan is a heavily depressed father prepared to do anything to save his sole remaining son, the asthmatic P.I Scott Selby (my favourite) is the very image of a film noir character; middle aged, overweight, trench coat wearing; utterly fantastic.  Even the F.B.I agent has some foibles having a drug addiction that has to be combated at various points through the story.

This is less a game and more an experience, a wonderful child of film and game rolled into one.  The graphics are beautiful save for a few dodgy animations, the soundtrack is haunting and sorrowful and there is a lot of replay value in the different choices you can make to get to the games epic conclusion.  Despite the replay value though I don't think it is a game I personally would ever replay, as I have never replayed the similar Fahrenheit. 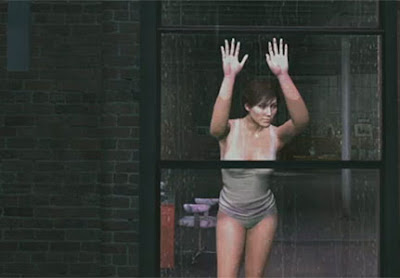 At times the situations the characters get in do feel slightly silly, there is only so many times you can get captured and have to escape in a game, at least 5 or 6 times through the course of the game you find yourself in some ridiculous James Bond style death trap (such as having to escape from a car dumped in a lake).  Also it seems that the most benign situations turn into Psychoville, it got to the point when something as innocent as a scene at a characters house would devolve into crazy action time as a random Psycho emerged from out of the woodwork.

The game is really unique and is a must play if you own a PS3, highly recommended

Posted by Daniel Simmonds at 07:17