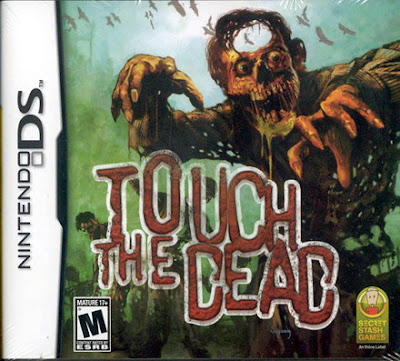 It is Christmas so here is a totally non related review of a horror game set in Summer (maybe?). The game was originally called 'Dead and Furious' which is actually a better title than Touch the Dead (after all who wants to touch corpses?).  Even the title screen music features someone shouting "dead and furious!"  Touch the Dead is an on rails shooter using the stylus to shoot the various enemies by tapping them with it.

The comic book style intro sees you as Rob Steiner a Prisoner who has recently been transferred to a mysterious Prison. In the middle of the night your Prison door opens, taking the opportunity to escape you hastily leave only to find the Prison empty. You find a discarded gun and head off into the deserted Prison in search of an exit.  Instead you find hundreds of zombies; the former inmates and staff! The games story is really basic with you discovering story via locations you go to in search of escape.  Starting off in the Prison you exit to the Medical and Science wing where by visual clues it seems that scientists were experimenting on the inmates and that something went terribly wrong.  The game takes place over 4 chapters, each chapter made up of 3 stages ending in a boss fight.  Even when you finally escape the complex you are not safe as it is situated in the middle of a vast swamp miles from anywhere and populated by nightmare creatures.

You cant control Steiner, instead he automatically walks through the levels exploring rooms while you are in charge of his gun hand.  Sometimes Steiner will get to a crossing where you can choose which route to go down.  Dotted around the levels are crates which hold ammo and health as well as upgrades for your weapons and unlockable artwork.  You kill enemies by tapping them with your stylus that acts as you shooting them.  You have to manually reload your weapons which you do by dragging an ammo clip from one side of the screen to your gun chamber which is on the other. 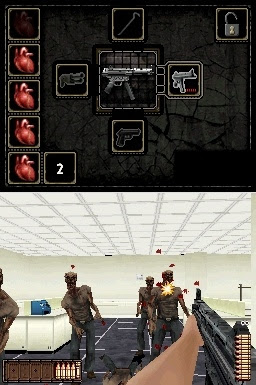 For the most part enemies are various types of zombies.  Mostly the zombies attack by getting close to you and then clawing or biting you though some hold back and instead fling their head at you.  The zombies are varied; starting off with inmate and Prison staff zombies you gradually encounter Dr zombies, Army zombies and rotting zombies.  Other animals have also become zombified, these creatures include rats, bats, maggots and even Alligators.  Every now and again military drones turn up to give you added grief.  The bosses are mostly giant zombie cyborgs being in various stages of creation (such as a rocket firing cyborg zombie torso you fight at the end of chapter 2 who is still attached to a conveyor strip).

The sound effects are great, only the title screen and boss fights have music (generic but cool hard rock) while the rest of the game oozes atmosphere.  On rooftops you get howling wind, in the Prison you hear screams echoing down the corridors, all really well done. 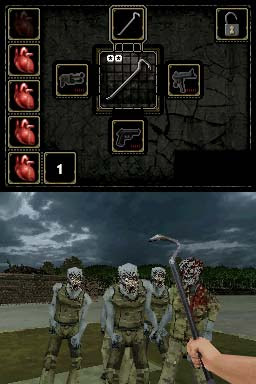 The game looks terrible it must be said, it looks like an early Playstation game with really blocky and ugly looking textures.  Shooting zombies results in them loosing chunks off them, and even getting large holes in them as well as the loss of naff looking thick blood goblets that fly off.  There are cut scenes throughout but just usually one liners that see Steiner taking the mick out of the games bosses.  For the most part you are just shooting enemies, though later you get access to a crowbar that can be used to bash open doors.

The very last chapter is kinda annoying as it features a really boring boss fight followed by a very strict 5 minute time limit to get through a zombie packed warehouse, failing this results in you being put back to before the boring as heck and fiddly boss fight. 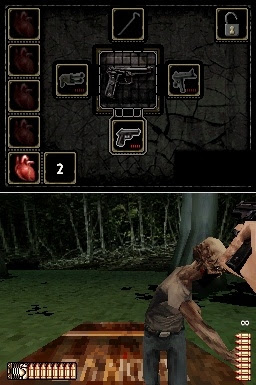 The game is fun though and despite the difference in control style feels like a companion piece to Dementium: The Ward.  Both are kinda ugly, have amazing atmospherics, brief stories and long meandering levels.