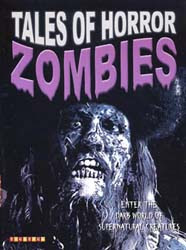 Tales of Horror: Zombies is a light weight A4 sized book(let) which as far as I can tell is aimed at the teenage market.  It covers a range of topics about zombies that range from zombie films, to zombie myths and legends from around the world.

It seems the Tales of Horror: Zombies is part of a series of light weight books designed for casual fans of all things Horror.  Other books in the series include Aliens, Vampires, Werewolves, Ghosts and Monsters.  At 32 pages long, and with giant pictures everywhere this is very casual and covers topics with next to no information, and seemingly at random.

Starting off with an introduction to zombies the book goes onto talk about real life zombies (in the form of Voodoo), zombie myths (such as Viking Draugrs and Golems) then finally talks about zombies in films like Frankenstein and Shaun of the Dead.

My problem with this book is that for a zombie fan like me all the information is already known for the most part.  I do admit that I had never heard of the legend of Chinese Hopping Corpses!  For such a brief tour of the creatures the inclusion of sub-zombies such as Mummies and Frankensteins Monster was predictable but maybe a unnecessary divergence.  I wondered if it was wise having a topic on zombies in films when the book is aimed at people under the age of 18 but the films they do talk about are mostly under that age rating anyway (Night of the Living Dead is an 18 admittedly).

The text is very brief and simple, the pictures are quite awful for the most part being crude computer generated images such as a digital skeleton bursting out of a digital grave.  I guess this was done for cheapness as the book does not have the feel of a quality item.  Overall though the book is a good introduction for zombie virgins and hopefully helped to at least make some people see just how amazing zombies are!

Posted by Daniel Simmonds at 12:43