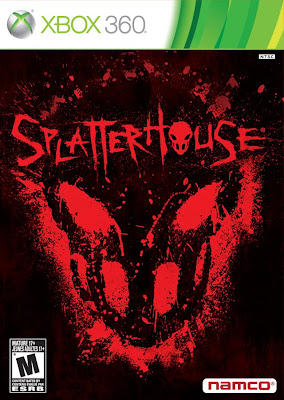 Splatterhouse is a modern day reimagining of the classic horror trilogy.  Splatterhouse games were very bloody for the time, but they also contained an element of actual horror to them.  This remake is an action brawler, I guess it most closely resembles the style of Splatterhouse 3 which is a scrolling beat em up.

As in the previous games you play as Rick Taylor, this time he is a College Student who has gone to the mansion of renowned Scientist Dr West with his girlfriend.  The game begins with Rick laying in a pool of blood in the Mansions entrance hall.  He is dying, his girlfriend Jennifer has been kidnapped by Dr West, and a strange Aztec mask is talking to him.  The mask tells Rick to put it on and with his last energy he does just that.  The mask transforms nerdy Rick into a hulking brute and then tells him that until Rick has safely rescued his Jennifer it will possess him, granting him super human strength in the process.  With his new found power Rick heads off into the bowels of the Mansion, hot on Dr Wests tail. 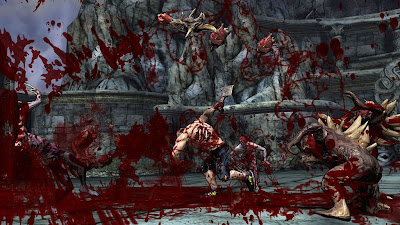 The plot in this game is really quite basic but well told.  Basically West wants to resurrect his dead wife, to do this he plans to use Jennifer as a sacrifice to bring the dark Gods to Earth.  There are plenty of cut scenes, while all simple and not too exciting they do provide motive to Rick as well as slowly through the course of the game reveal the events leading up to Ricks near death.  As you play through the game you unlock Journals from Dr West which provide the sad back story to West and his descent into madness.

This game is a very bloody 3D brawler,  maybe not surprising for a game called Splatterhouse but there is literally mountains of over the top blood and gore in this.  By the end of the game you must have fought at least 1000 monsters all killed in brutal and bloody fashion.  When an enemy is near death it gets a red outline which indicates that Rick is able to perform a QTE on it.  Rick pulls enemies in half, rips eyeballs, limbs and heads off creatures and even for one monster rams his arm up its backside and pulls out its intestines!  Every hit you do creates pints of blood.  Combat is quite simple, the usual light and heavy attacks but Rick is also able to rip limbs off enemies to use as make shift weapons as well as to use special moves (arms turn into giant blades and the ability to create shock waves).  Your magic meter is constantly filled up by the blood of your foes which allow you to do these special moves. 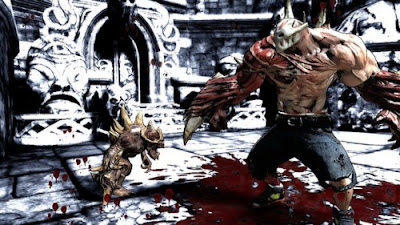 Enemies are all monsters, they range from very weak ghouls to zombies (Rick notes they were formally students from his College), giant frogs, evil clowns and lots of  Eternal Darkness style Demons.  Bosses are not too frequent, but it is nice to see slight homages to previous bosses from the series such as the duel chainsaw wielding butcher, and mirror versions of Rick.  You fight these over a variety of locations, while you initially are in the West Mansion, just like previous games a lot of the action takes place elsewhere.  Time Portals send you both to post apocalyptic New York, a ruined fairground and even America pre 1800's.  The levels are littered with various weapons such as 4x4's, swords, cleavers, and even a shotgun (first found via a cheeky nod to Evil Dead!).

The game is dumb fun and it has been said that you have seen everything the game has to offer within 5 minutes of playing.  This is kinda true, for the most part you fight hordes of enemies until the next doorway opens for you to proceed.  Some levels feature fun old school style 2D sections that revolve around avoiding obstacles such as spinning blades and spiky plants.  The music is not very good; a load of death metal licenced tracks play during fighting which I guess are ok but do not help to make the game feel at all similar to the tone of the previous games which felt like game versions of 80's horror flicks. 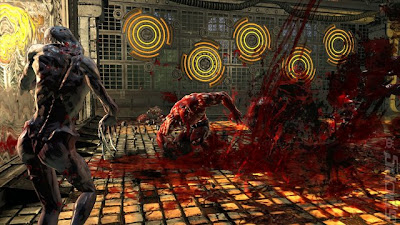 The game has quite a bit of replayability such as hidden items to find (scraps of photos of Ricks girlfriend Jennifer who for some reason appears to be topless in nearly all the photos you find), audio diaries of Dr West, varying difficulties to play though as well as a Survival mode which sees you in an arena and tasked to survive 20 waves of enemies.  The game even has easy to unlock versions of the original trilogy (very cool as Splatterhouse is here in its uncensored form and Splatterhouse 3 is like gold dust).

The game is nothing special, but I did have a lot of fun with it despite agonisingly long load times and cell shading that gives the game a comic book look to it (I have never liked cell shading).  It is already half price due to poor sales (cost me £18).  Don't look at it as one game, see it as 4 games as the originals are still fantastic and worth paying money for!  Horror as done by music videos.