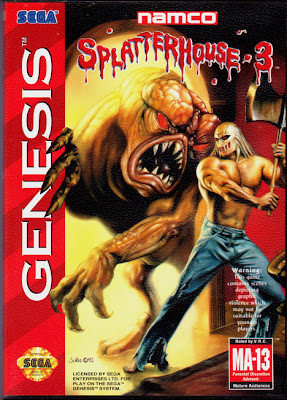 I played this game many moons ago on a Megadrive emulator on my PC.  The game felt very hard to me but I put that down to using a Keyboard for something that's designed to be played with a Controller.  I had hoped it would appear on the Nintendo Wii's Virtual Console like the previous games in the series but alas that did not happen.  Luckily the game has finally appeared; as an unlock-able in the newly released Splatterhouse remake.

The game takes place around 5 years after the events of Splatterhouse 2 and life is going good for ex mask wearing psychopath Rick.  He has married his one love Jennifer, they have a lovely little boy named David and they live in a humorously large mansion.  Disaster strikes as the big bad Nameless One once again rears his ugly head (heads?).  He assaults Rick at his house, leaving him left for dead, his house possessed by Demons and the fate of his wife and child unknown.  Donning the power giving Mask once again Rick heads off into the depths of his house to get back the ones he loves. 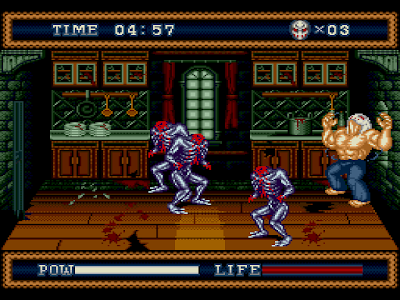 Unlike the other 2 games in the series this game is a scrolling beat em up with each of the games 6 levels taking place on a different floor of the mansion.  Each floor comprises of a small maze of rooms, in each room you fight various Demons and after they are beaten the doors to the adjoining rooms open and by pressing Start you bring up a map of the level with which to plan your route to the levels boss (indicated by a large red X).  Each level has a strict time limit which affects the fate of your family members so the quickest route is needed if your to have any chance of getting the good ending.  However the quickest route is full of the toughest enemies while going off route nets you weapons and extra lives.

The game is extremely hard and quite unfair with the average enemy able to take off up to half of your health bar in one hit (some can even take off 3/4 of your health which is soul destroying!).  The first 2 levels are fun to play through but after that each encounter is a nerve wrecking health destroyer.  The enemies mostly comprise of Demons, with the first few levels giving you headless zombies as easy cannon fodder and later ones giving you Demon dogs, blobs, and spiky things reminiscent of the remakes monsters. Enemies can only attack horizontally but you move so slowly that it can be tough to avoid their attacks regardless.  Getting hit too much sends you flying into the air and onto your back where you lays like an idiot for several seconds before slowly standing up. 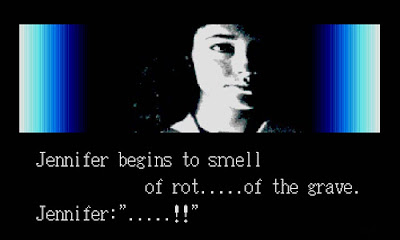 The game does feature some great bosses with the level 3 boss being the best of the lot.  The fight takes place in your Sons bedroom and has you fighting a photo realistic digitised teddy bear, as with all boss fights, and enemy fights there is a second form to fight, the bear rips in half to reveal a Demon wearing the teddy bear suit like some sort of costume.  This is also the first game where you actually get to fight the Mask itself (though kinda odd that even while fighting the Mask you are still wearing it as well (Paradox!).

The game is gory mostly due to the enemies second forms which usually involve either their heads being coated in blood, or part of their head being destroyed.  Fighting a Demon whose head is made up of hundreds of writhing maggots is not pleasant!  Fighting this time though does not lead to the inventive deaths of the previous games, with most encounters leading to the dead enemy just dissolving into goo.

Weapons are far less frequent and as soon as they are knocked out your hand a ghost appears and carries off the weapon.  You have access to punches, jumping kicks as well as head-butts, throws and a powerful and needed spinning kick that renders you invincible for several seconds.  You can transform into Demonic Rick which makes your attacks far more powerful, yourself much less likely to take massive damage but also slows you down to a snails crawl.

To be honest I was gutted with this game, there is so much potential but it is squandered by the difficulty which even on normal makes the game a miserable experience.  It makes me sad that this game is not great as it is easy to see how this could have been so if not for the hardness.  The time limits for each level are harsh, by the end of the game my wife was dead, my son dead and the destruction of the World only narrowly averted due to running out of time constantly.  The game is worth playing but only just, a real shame.

Posted by Daniel Simmonds at 03:36