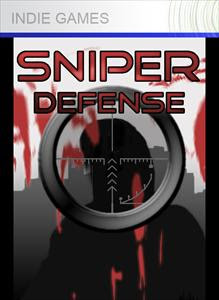 I have a huge back log of demos to play on my X-Box 360, I chose Sniper Defense at random and didn't even realise it was a zombie survival game until it had started.  Indie games are usually bad as I have often said so I was not expecting much at all.

The game is up to 4 players and sees you as a sniper manning a barricade.  Zombies wander onto the screen from the left and head toward a barricade on the right.  You aim a red reticule with the aim of taking out all zombies, with each wave of zombies you survive you gain money with which to buy new weapons.  Starting out with a pistol you can buy machine guns, shotguns, flare guns and more to complement the gun with. 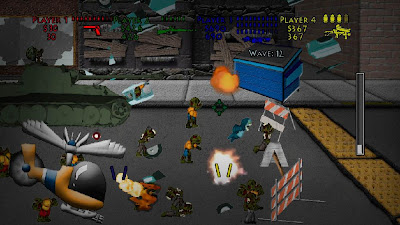 Zombies are in various stages of decomposing and range from fat to skinny to crawling ghouls.  You get weird blue zombies who fly onto screen and then charge for the barricade but for the most part they just slowly stumble on from the left.  I played the first few rounds and must say it was extremely boring, not once did I feel remotely like my barricade was in danger.  I am sure the game will speed up and finally becoming a tense shooting fest but I was falling asleep long before it got tricky.

The game is 80 Microsoft points so is the cheapest it could be but it is really really boring and looks bland as Hell, even shooting the zombies is not satisfying as they instantly vanish the second they hit the ground. A sniper game in which you don't ever use a sniper rifle; ace.