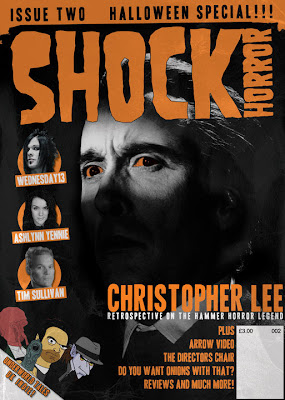 Well, wow what an improvement! That is not to say that issue 1 was bad, but it was certainly full of noticeable errors.  Issue 2 really feels more settled, and comfortable.

The main feature this month is an extremely interesting article on the master Christopher Lee.  The article (written by Simon Lucas) is full of really interesting facts I never knew about the legend.  For instance; as a child Christopher Lee met Rasputin's killer (Lee played the part of Rasputin in Hammer Horrors 'The Mad Monk Rasputin').  A menagerie of different friends I bored by reeling off all the facts the article provided!

Dr Dale from the Zombie School of Survival returns with his 2nd lesson for Shock Horror readers.  While his Podcast can be patchy, and seems aimed at a young demographic his classes in Shock Horror are really funny, and genuinely make me laugh out loud.  Dr Dale is a genius! 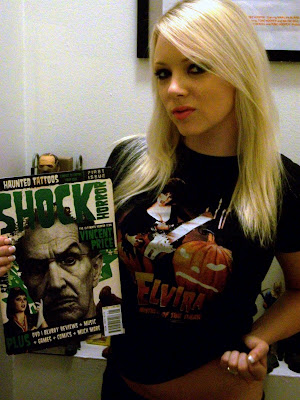 The film reviews are much more interesting it seems, though I cant quite say why.  Some of the films I had not heard of and will be tracking down, while others such as Frozen I have heard only bad things about, so reading such a glowing review (4 out of 5) has made me now want to see the film despite the warning of friends.  The Videogame reviews do seem better researched this time, and less like Press Releases, though still not great (they should ask me to write them! Heh, I am really geeky when it comes to Videogames as that's my main love).

Other entertaining articles include one on Arrow Videos which has really made me want to splash out on all the Video Nasties the company is releasing in beautiful form, and an interview with Tim Sullivan (of 2001 Maniacs fame), though other articles such as Screenwriters Surgery, and Making the Monster do kind of make my eyes glaze over.  I think that is because they are about working in the Horror Industry, rather than about actual Horror itself.  There is a brief (too brief) article about extreme Italian Cinema which could have done with being double the length as it feels like a whirlwind tour of the topic.  Hopefully Italian Cinema will be revisited in future issues as it is a fascinating topic.

The magazine Shock Horror feels to me like Kerrang! if they were all about Horror rather than music.  It is one of those easy to read magazines that just commands your attention with its easy to read layout, large pictures, and I have to say the magazine still looks beautiful (love the thick pages!)

You can now subscribe to the magazine at the Shock Horror website something which I am just about to do myself actually!  I really hope the magazine keeps on for a long long time! (R.I.P Darkside Magazine).
Posted by Daniel Simmonds at 04:29

thanks for the update and post... though i had to stop when my eyes gazed on the lovely... then brain stopped...
:)
iZombie