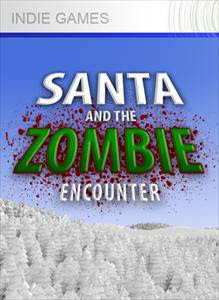 It's getting near Christmas so the Xmas games are bursting into bloom on the X-Box Indie Channel.  With zombies still very much in vogue (zombies are a god send for game designers as they don't require any A.I whatsoever) it was not surprising to see a Christmas/Zombie crossover.

Santa and the Zombie Encounter sees you playing as the fat man himself; Santa.  The game starts with Santa laying prone in the snow, the remains of his crashed sleigh around him, presents scattered everywhere.  Over this plays March of the Sugar Plum Fairy (one of the ultimate Christmas songs).  It really is quite atmospheric for an Indie game.  Maybe this time there is a game that actually has had some effort and seriousness put into it?..that is then promptly ruined when Santa lets out a 'hilarious' fart and stands up.  Santa's task is to traverse the snowy fields he finds himself in, looking for his missing Reindeer while avoiding hostile wildlife, and hundreds and hundreds of zombies who seem to have come from log cabins situated about the place.

The story is minimal but does its job, not requiring words to explain what needs to be done.  A really cool opening, and the best part of the game by far.  The graphics are less cartoony than i expected.  Santa, the wildlife, and the zombies are all to scale, and realistic interpretations rather than goofy over the top ones.  A special mention must go to the blood.  Blood on snow looks great (as demonstrated in the excellent Dead Snow) and here it is no different.  The blood is a dark red wine colour, and not thick, but splotchy.  I was expecting bright red stupid looking blood, so this was a welcome surprise.

The game is a twin stick shooter, with the right shoulder button used to fire your gun.  It takes place from a near overhead perspective. It starts with you choosing your weapon set for Santa.  I went for Machine Gun with Flame Thrower attachment, but others such as Mini-Gun, Shotgun and Grenades and others is available.

By killing wildlife, zombies, and leading your lost Reindeer back to the sleigh you get money.  This money can be used to upgrade Santa's health, increase weapon damage, and increase the clip size of your weapons.  Rather than take place over one screen there are a variety of different locations you can travel to which is cool, though travelling between each one brings up quite a lengthy load screen.

I have to admit this game really is not bad.  At 240 Microsoft Points it is a tad expensive for an Indie game, and put me off actually buying it rather than just playing the demo.  It is a shame that the Christmas music only plays over the intro section, while for the game proper it is silent save for the loud noise your weapons make.  The zombies are plentiful and even include boss zombies (such as a mad axe man zombie I came across).  The tone of the game is more serious than usual, but a completely straight faced survival tale would have been more welcome (as soon as Santa farted my hope for the game died).  Still; not bad, not bad at all.  Up to 4 players also if that is the sort of thing to float your boat.

Posted by Daniel Simmonds at 11:44