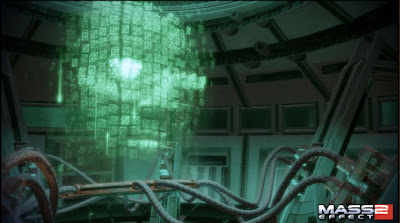 I have finally got around to playing the final two slices of DLC (downloadable content) for the mighty epic space opera that is Mass Effect 2. Overlord is a stand alone mission that sees you matching wits with an omnipotent V.I, while Lair of the Shadow Broker ties more into the main story line of Mass Effect 2 seeing you team up with Liara T'Soni as you track down the enigmatic Shadow Broker.

In Overlord you (as Commander Shepherd) arrive on a Cerberus base on the Planet Aite after Cerberus looses contact with the outpost.  You soon come under attack from both the Geth (sentient A.I) and robots under the control of a V.I intelligence that has gone rogue.  Cerberus had a plan to link up a Human mind with a V.I who could then connect with the Geth consciousness and thus get them to end their assault on the Galaxy.  Things immediately went wrong with the enraged V.I hybrid cutting off communications from the outside world and butchering all the inhabitants of the base. 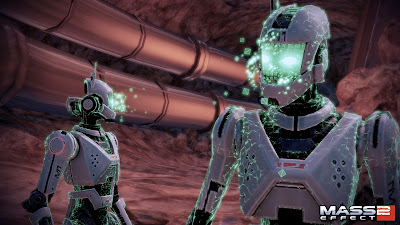 After an exciting intro to the mission where you must disable a giant satellite dish to stop the V.I from leaving the Planet (its aim was to take over control of all electronics in the Universe) things become more sedate.  There are 3 locks that must be disabled before access to the V.I mainframe can be done.  This involves driving around in the M-44 Hammerhead in an open world environment.  Vehicle sections are not Mass Effect 2's greatest achievement so the driving sections are competent, but nothing special.  The missions to disable the locks are ok, definitely not too exciting and feel Mass Effect by numbers.

The last part of the mission sees you getting to the mainframe itself.  Shepherd gets attacked by the V.I and is sent into a virtual reality where she learns what happened to cause the rouge V.I (again Cerberus are shown to be highly suspect).  The DLC is quite cool, the Lawnmower man type floating green head is cool, as is its freaky feedback screams. The payoff of the classic moral choice is quite cool.  Overall though while a good mission, it is not anything special and so if you love Mass Effect 2 then get it, but it is just more of the same. 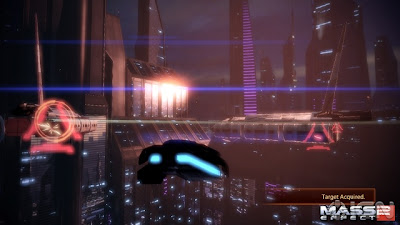 Lair of the Shadow Broker is an epic mission.  Cerberus information provides some key Intel on the location of the mysterious Shadow Broker (a suspect information gatherer).  After giving this info to Liara T'Soni (she wants the Shadow Broker dead after the death of her partner) she promptly vanishes after a failed assassination attempt.  You follow her to an office block where all hell brakes loose with the building exploding and the arrival of the Shadow Brokers personal Army gunning for you. An exciting chase across the skies of Illium after Liara's assassin leads to a mid point boss fight (some ace dialogue here!).  The 2nd half of the DLC mission sees you arrive at the Shadow Brokers floating fortress for an epic showdown with him.

The DLC ties up some loose ends and gives good payoff in extra information on all the major characters of Mass Effect as well as ongoing awards such as cool little video clips, investment opportunities, and the conclusion to Shepherds relationship with Liara. 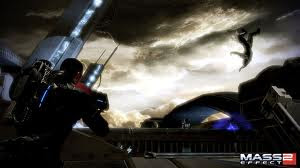 If you like Mass Effect 2 then this DLC is quite essential, it really feels like a proper section of the game rather than a throwaway mission (such as Overlord).  There is lots of story, and exciting cut scenes and the whole Shadow Broker Lair section of the game looks beautiful.  If I had any complaints it would be that by this point in the game (takes place after the last mission in the main game) I was quite over powered and cleaved my way through everyone without breaking a sweat.

Posted by Daniel Simmonds at 04:26