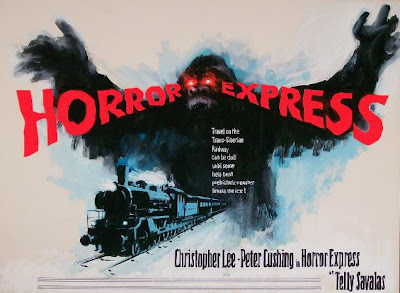 I got a load of horror films for Christmas, one of which was Horror Express, a classic starring the horror alumni of Christopher Lee, Peter Cushing and Telly Savalas.  The film came out in the 1972 and has the feel of a classic Hammer Horror film.  The tone of the film is very similar to 'The Thing' with an alien presence with the ability to possess it's victims.

The film starts with Christopher Lees character Alexander Saxton discovering the frozen body of a large primate that Saxton thinks is the missing link between man and ape.  He decides to transport it via train on the Trans-Siberian Express but strange occurrences start to happen.  People keep on ending up dead around the crate the frozen body is being kept in. It isn't long until the giant Ape is discovered to be alive (though unfortunately it has already escaped at this point).  It seems the Ape is able to suck out the intelligence of its victims via its glowing red eyes and that the creature is able to get more and more knowledge this way.  Eventually the ape is destroyed but not before the alien intelligence has managed to transfer itself into someone elses body.  It is up to Saxton, his rival Dr Wells (Peter Cushing) and a few others to discover who the host of the evil is and to put a stop to it. 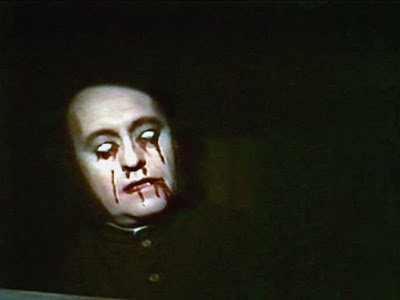 Nearly the entire film is set on a train (hence the title 'Horror Express'), but despite this is never boring.  The victims deaths reminded me of Fulci's zombies in 'City of the Living Dead' with the bleeding eyes.  The films score is of the time but really quite good with the film held together by a score that transcends the boundaries of film by having various characters whistling the theme, as well as a woman playing the theme on her piano at one point.  I guess if I was going to be geeky I could suggest that it transfers itself around much like the alien consciousness does.

The origins of the creature are explained eventually but there is a good sub plot of a monk who is convinced that the evil is Satan itself.  It is interesting and unexpected that the giant Ape creature does not survive long into the film, I was starting to think the film was going to be a monster one when instead it turns more into a thriller.  The alien can only kill people with its glowing eyes when in darkness, this makes for some great shots of various people it has possessed looking menacingly at the camera lit from beneath. 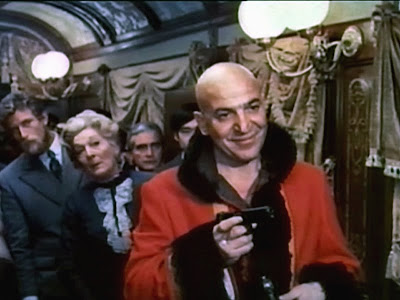 Cushing and Lee play off each other wonderfully.  While they are rivals in work, they are united in the fact that they are both Englishmen, and so come together whenever there honour as an Englishman is questioned.  Terry Savalas very nearly steals the film despite his late entrance 4/5's of the way through.  He plays an insane Cossack guard who somehow seems to know exactly what is happening on the train.  His screen time is just that little bit too brief to totally steal the film but he makes a damn good stab at it; very entertaining!

The film does feel very old, but it is also good, and quite original (made before John Carpenters remake of The Thing). Some terrible acting, and a man who inadvertently looks like a cat as well as a decent score make the film never outstay its 90 minute run time.  Lastly just when you think it is all over the zombies appear, a great end to a good film! 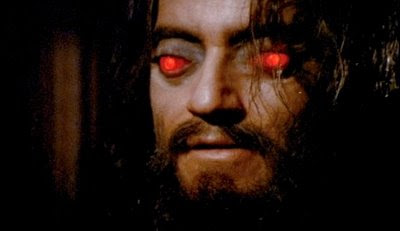 I apologise for the nature of this review, I am room less at my sisters so am constantly being moved around like some kind of enclosed vagrant, having to take the laptop and other junk with me whenever I get moved on from my latest spot.