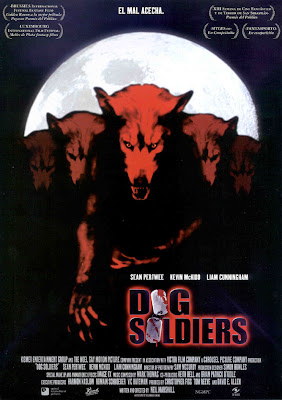 Not that keen on Werewolves truth be told.  I don't know why, I have just never found them particularly scary or interesting monsters.  I'm the same with the films.  Wolf man was lame, American Werewolf in London/Paris are ok, did not like The Howling or any of its sequels, and Werewolves are my least favourite part of the Twilight saga.  Dog Soldiers is a British horror film released in 2002.

A British Army Squadron is on a training mission in woodland up in Scotland against a Special Ops Squad.  During the mission they come across the Special Ops base camp and find nearly everyone dead, the victims seem to have been eaten by some sort of animal.  Finding some survivors they head off to get help but soon come under attack by strange giant wolf type creatures.  Bumping into a travelling Zoologist they retreat to a desolate farmhouse where they must defend themselves against constant attack by what turns out to be Werewolves until morning comes and the moon passes. 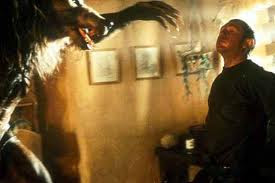 The early trailers for this film were not good at all due to their misleading nature making the film seem like it was going to be a comedy.  The film has humour in it, and intentional humour at that but for the most part the film is pure horror.  The film is roughly split into 2 parts.  The first part is set in deep woodland and has the characters discovering what is going on, the 2nd half is very static and set in the under siege farmhouse.  The parts go together well, and feels like a natural progression rather than a jarring mismatch.

There is a lot of black humour in this film, from a dog that repeatedly tries to eat an injured mans internal organs (hanging out of him) to a Soldier throwing a stick and shouting at the Werewolf to 'fetch'.  The characters themselves are all 'blokes' so there is a lot of banter littered with swearing, manhood questioning, and football.  As Soldiers the cast come across as convincing and tough.  The only bad character is the Zoologist Megan (Emma Cleasby) whose character is a bit flat and just doesn't seem to have any depth to her. 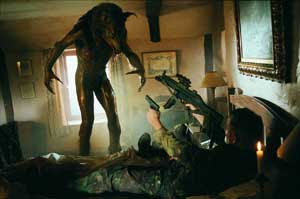 The Werewolves are all done via suits and animatronics.  They don't look too great in motion being 8 foot tall awkward looking and very unreal gangly things.  It is best when they are lost in the darkness as light reveals the effects to not be that convincing.  The Werewolf transformation scenes are poor, being in general someone who is about to turn falling under a convenient object as a Human, emerging as a fully turned Werewolf; a bit lame.

The film has plenty of gore, lots and lots of the stuff as well as miscellaneous squelchy body parts which is always appreciated as well as some cool werewolf injuries such as a Werewolf that gets a silver tap jammed in its head, a Werewolf who spends most its time with a big sword sticking though its chest, and a Werewolf that gets its hand/paw lopped off. 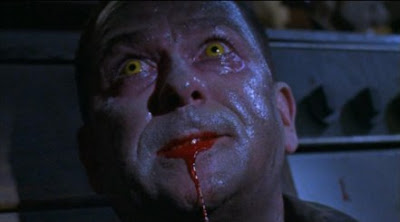 The plot is very basic, there are some twists and turns but nothing to get excited about.  Special mention must go to the quite humorous ending shot of a newspaper.  A good British film, with decent acting and likable characters, it is just a shame that it is a Werewolf film rather than a monster that is interesting.

Posted by Daniel Simmonds at 05:47