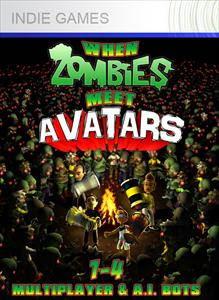 From the makers of the average Avatars, Ghosts 'n' Zombies comes a new game featuring everyones favourite things - Avatars and Zombies!  This is yet another arena based game, though this time is in 3D rather than overhead (just for a change).

You play as your Avatar in a field of overgrown grass that is surrounded by houses, as well as billboards advertising the other crappy games the creator has done.  You play with up to 3 other players, or bots.  The first part of each game sees you fighting off waves of zombies, the main part sees you hunting the other players while zombies become just irritants. 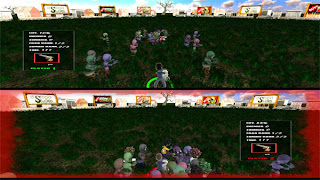 The game is not very good.  There are about a billion identical games of this type on X-Box Indie games.  It's in 3D for once, but still is very boring.  An inoffensive ditty plays, the zombies growl and moan, and your Avatar looks as silly as ever.  You can collect different limited power ups such as rockets and a shotgun.  The zombies are quite good looking, and have humorous things such as kick me signs on their backs.

It is only 80 Microsoft points, but it is also very bad, bland, and lazy.  Do not buy this piece of junk!