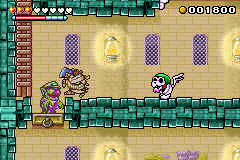 I'm not going to do a review of Wario Land 4.  It has a lot of horror elements interspersed within its levels, but is far more a traditional Nintendo cutesy platformer than a scary horror.  The cool thing about the Wario Land games is that Wario is kinda invincible.  If he gets squashed by a heavy block he can carry on in a flattened guise.  If he is set on fire or frozen then he gains specific abilities.  He can be stung which inflates his head, or he can be hammered which turns him into a spring.

The basic plot of the game is that a Pyramid has been discovered in a jungle.  Wario loving gold and wealth heads off to explore the Pyramid.  There are warps all through the Pyramid which takes Wario to a variety of different locations.  In each location he must find 4 parts of a giant gem as well as find a key to get further into the Pyramid. Level wise there are a few kinda relevant to horror.  One is set in a Town at night, while another is set in a place called 'The Haunted Hotel'.

If bitten by a Bat Wario turns into a Vampire Bat, he is able to fly but if he comes into contact with light he turns back into normal Wario.  In some levels there is a floating monster ghost.  It spits green balls of goo, which if they hit Wario transform him into a Zombie!  Zombie Wario moves very slowly, and melts through platforms.  This is a curse rather than a blessing as it has no advantages to Wario whatsoever.

So Zombies get everywhere! Apart from that the game has no place in this blog.  Special mention must go to the grotesque looking bosses though.  They include a giant man eating plant, several giant ghosts, and hideous monster children. 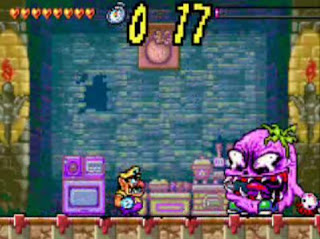 If I were to score this game it would get a 3/5 I think.  Quite fun, but quite easy also, though the bosses are challenging to fight.

Posted by Daniel Simmonds at 04:44