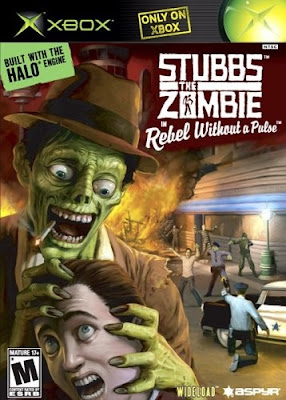 I love this game, I really consider it to be a classic.  It came out towards the end of the X-Box's life.  It is a third person action game that sees you as a playing as a zombie rampaging through a futuristic looking new City called Punchbowl in the late 1950's.  The game features a soundtrack of classic tracks covered by current (at the time) bands.

The game starts with a corpse rising from the ground in a newly opened City of Punchbowl.  Being a zombie the corpse (Stubbs) goes on a rampage, eating the brains of all who get in his way.  The plot kind of happens around Stubbs.  Just by chance he stumbles into relevant plot places and through the course of the game learns of his past, discovers a love interest, and gets his revenge on his murderer. 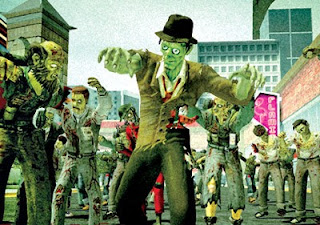 Stubbs the zombie is a very fun game.  The story is very goofy, sometimes too goofy, but underneath all that is a classic revenge tale. Despite it's silly nature the game is actually quite violent.  Each human Stubbs kills via brain munching is resurrected as a zombie that you are able to give some basic instructions to.  Via whistling and pushing you can get the zombies to go where you want, and kill who you want.  Very useful when there is someone with a gun you need to take out.  Simply send a wave of zombies to soak up bullets while you walk behind.  All humans with the exception of helmet wearing ones can come back as your undead allies.  The helmeted enemies are not too much of a threat either as you can rip thier arm off and use it to beat them to death with!

Though Stubbs is a zombie he is not immortal.  In fact he can be surprisingly weak.  Luckily you get access to a host of special abilities.  Stubbs can remove his own head that can then be bowled at humans.  Stubbs can remove a hand that then turns into a Thing style monster.  Any human can then be controlled by clamping the hand onto their head.  They can be made to attack other humans, or even to press switches and open doors for you.  The third ability you have is to throw an exploding spleen at enemies.  Your last ability acts like an area bomb.  You let off a load of toxic gas that stuns all nearby enemies. 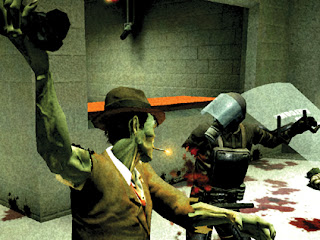 This is one of the rare games that I completed on my very first play through. I was addicted, and as a result of playing it was late for a Friday night out of drinking.  It took me about 6 hours to do, the game never gets boring.  Starting off in the City of Punchbowl the game progresses to the Country where redneck militia fight you, leading to some of the games most atmospheric sections as you and your zombie pals charge through cornfields to pick off lone gunmen, attack sheds, and eventually assault an old mansion.  The middle part of the game is a bit patchy, various locations stuck together using the vehicle of a Sheep to get from one disparate place to another.  The later part of the game sees you return to a now war torn, zombie infested Punchbowl to complete your accidental revenge odyssey.

The game is very addictive, and features some fun set pieces.  The first boss of the game is the Police Chief.  Rather than fight him though he engages you in a surreal dance-off.  A later boss challenge sees you urinating into Punchbowls water supply while respawning enemies swarm your position to try and stop you.  The end of the game unfortunately sees quite a generic boss encounter that is more frustrating than challenging. 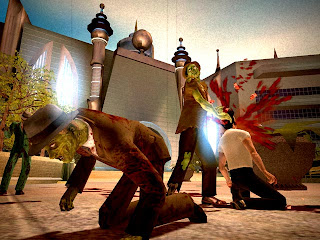 A cult classic built using the Halo engine (the vehicle sections control identical to Halos Warthogs).  Looks great, has a wonderful soundtrack, and is still as fun to play now as it was then.  The game is also 2 player split screen, but as usual never tried that.