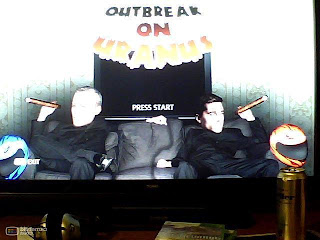 Outbreak on Uranus is yet another mediocre zombie videogame on the dubious X-Box Indie game channel.  It is by Silver Dollar games who have released some utter trash in the past, as well as the fun Head Shot series.

Outbreak on Uranus sees you play as a young businessman wearing a motorbike helmet who must endure a zombie outbreak on the Planet Uranus.Each level takes place in a different part of a station.  Waves of zombies swarm towards you, with the end of each level leading to a boss fight with a giant zombie. 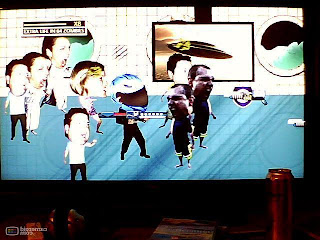 Everything is really big in this game, the enemies and characters taking up over half of the height of the screen.  Everything is real when it comes to the zombies.  The zombies are photos of various people, think the real people who appear in South Park.  They don't look at all like zombies.  Not remotely.  They are various men and woman with stupid fixed expressions on their faces.  When you shoot them they get covered in blood, and really look quite disturbing due to being real people.  That said though the zombies heads are comically out of proportion to their bodies.

The game is a side scrolling shooter.  Nothing exciting happens.  Zombies shoot projectiles at you whether it be balls of spit, or lumps of sick.  If you get near them then they claw at you (indicated by a claw symbol on screen).  Though your avatar is massive it is only the head that takes damage.  You have a pistol but can pick up shotguns, flame throwers; all the usual stuff.

The music is actiony and really not bad.  Your avatar shouts out 'hilarious' puns as he progresses.  I just thought the game was not very good.  Puppets and things like that freak me out anyway.  The human looking zombies are quite creepy, not in a good way, and it was a bit disturbing gunning down human looking people (god I am turning into my parents!).

The game is only 80 microsoft points, but is very boring, and felt a bit wrong.  Get it if you want, but it's not to everyones tastes. You may have noticed by the quality that the screenshots were taken by my cruddy webcam.  That's what you get when you are such a quick reviewer!

Posted by Daniel Simmonds at 04:28