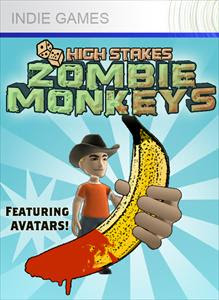 This is a X-Box Indie game that has been out for quite a while.  Despite its apparent quality the game is in fact not very good, and totally boring.

The game sees you placing bets on yourself as you battle zombie monkeys in an arena surrounded by spectators.  The character you control is your Avatar.  My Avatar is wearing a Sonic the Hedgehog body suit with a Frankenstein mask hat on.  It looks quite stupid so fits in with this game. 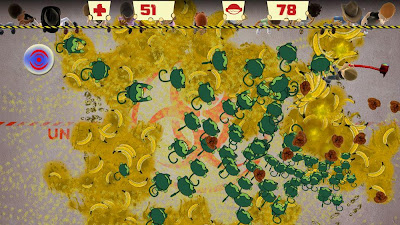 There seems no reason for the monkeys to be zombie monkeys.  They either throw poop at you, or climb on your back.  The monkeys are green, and explode in a shower of bananas when killed.  I think the only reason they are called zombie monkeys is a) Zombies are popular, and so has been lazily tacked onto this game idea, and b)  People might object to a game in which you beat to death normal monkeys.  Everyone knows monkeys are so cheeky though!

Before each short round starts you can bet how much of your current earnings you want on the outcome.  The outcome will be you beating to death all the monkeys with your polo stick.  Money earned can be used to upgrade your polo stick to a mace, sword, or even a light saber. 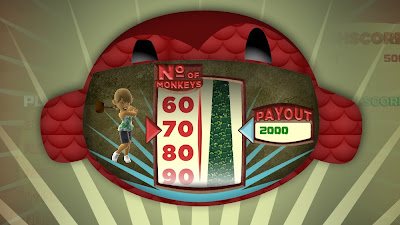 The game features an inoffensive little ditty that is not too bad to listen to, and the presentation of the game is not bad, I love the logo for the game which comprises a red poker chip featuring the face of a monkey with half its brains showing.  The game is only 80 Microsoft points, so as cheap as (poker) chips. Shame there just is not much to it.