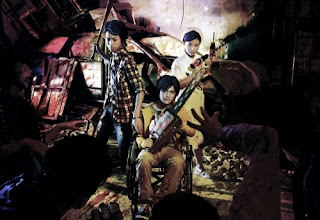 Zombrex: Dead Rising Sun is a zombie webisode that takes place in eight 5 minute parts, so about 40 minutes overall.  The show is set between the events of Dead Rising and Dead Rising 2, though taking place in Japan (the games take place in the USA) has no relation to the actual stories of either game.  The webisodes are directed by the creator of the Dead Rising series; Keiji Inafune.

Two brothers (Shin, and his wheelchair bound younger brother George) have been hiding out at their home following a massive zombie outbreak in Japan.  They decide they must get to a safe house rather than stay where they are. They spend all day visiting various safe houses but none will accept them.  With it getting dark they decide they must take refuge in a secure warehouse (in the Dead Rising universe zombies are relatively harmless during the day, at night they turn violent and stronger).  While hiding in the warehouse they are discovered by a gang of vicious thugs who attack them resulting in Shins death.  The arrival of an infected Nurse (Mary) on a quest to find Zombrex; the zombie virus inhibitor gives George a reason to survive and to fight back against both the hordes of zombies, and the thugs. 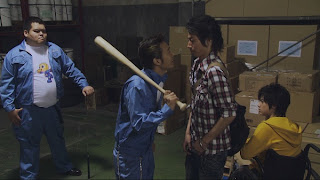 The first few episodes of this show are quite boring, and terrible.  Most the show takes place in a vast warehouse, with the first episodes concentrating on the brothers battle with the thuggish gang which drags on too long.  After the arrival of the Nurse the show really picks up and gets quite exciting.  Most of the program is shown from a first person perspective of the wheelchair bound George.  This is quite a unique approach to filming, and is quite impressive after seeing how this was achieved (at times 4 people were needed to create the illusion of the show being done from Georges perspective).  There are quite a few flashbacks that are generally filmed more traditionally, such as the brothers journey through the streets of infected Japan, and the Nurses flight to the warehouse.

The acting is hard to judge.  It is definitely over the top, and purposely done that way, but the whole thing is hideously dubbed with terrible English voice actors who don't even attempt to match the facial motions the Japanese actors make.  I would have loved to see the show with the original voices. The effects are quite good on the other hand with plenty of gore, and fighting. 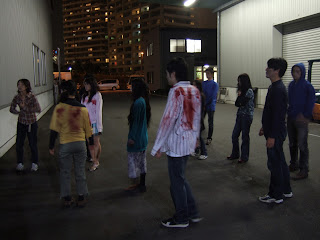 There a quite a few nods to the videogames.  The thuggish gang are of course the shows version of Dead Risings Psychopaths.  Psychopaths were crazed humans who showed up as Boss characters in the games.  The lead thug (they all appear to be warehouse workers) is extremely convincing, very mean, and scary.  It is no wonder his henchmen follow him so readily, he is a monster; having no respect whatsoever for anyone other than himself.  In Dead Rising 2 workbenches are introduced.  At workbenches the main character Chuck Greene can create custom weapons (such as a baseball bat with nails put through it).  A workbench is used here in this show also.  Georges wheelchair is crazily modified leading to a very exciting finale.  Zombrex - the zombie virus inhibitor is a big part of both the show and Dead Rising 2.

Despite a slow start the show does get quite good.  It is a shame that the English voice overs are so terrible, and that the whole thing is obviously on a very low budget.  The show includes some interesting interviews with Keiji Inafune who explains how he went about directing it.  Zombrex: Dead Rising Sun can be downloaded from X-Box Live Marketplace, as well as found on the web.

Posted by Daniel Simmonds at 12:14